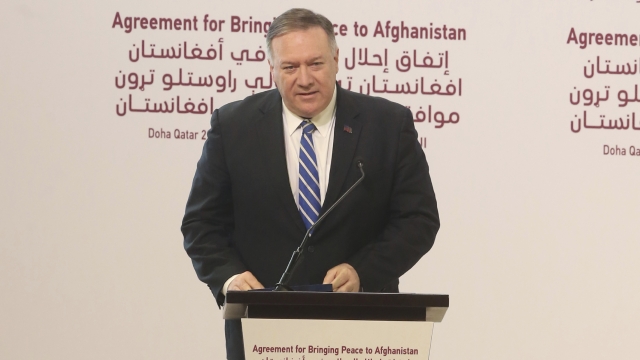 The U.S. and Taliban signed a peace treaty Saturday which hopes to end the 18-year war in Afghanistan, the longest war in American history.

In a Qatar signing ceremony, the U.S. agreed to withdraw its 13,000 troops within 14 months if the Taliban cooperates with preventing future terrorist attacks. It would initially reduce troop levels to 8,600 in the next three to four months.

"This is how we will ensure that Afghanistan never again serves as a base for international terrorists," said Secretary of State Mike Pompeo.

The war began soon after the Sept. 11, 2001 terrorist attacks when the U.S. targeted Osama bin Laden and Al-Qaeda in Afghanistan and toppled the Taliban regime. Bin Laden fled to Pakistan. The Taliban held on to vast territory and continued to launch attacks on U.S. forces and Afghanistan's fragile government.

The treaty was sought by President Trump in hopes of fulfilling a campaign promise to withdraw U.S. troops and end "endless wars" in the Middle East.