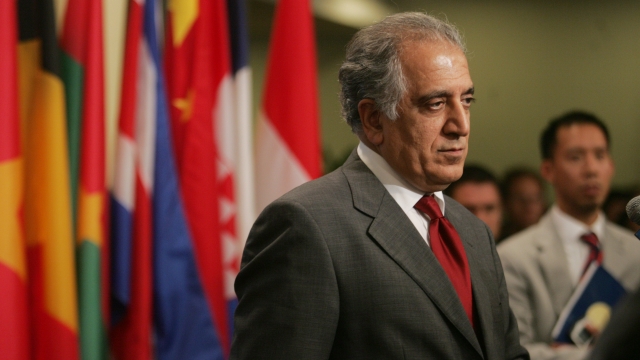 SMS
U.S., Taliban Hold 'Most Productive' Peace Talks To Date
By Alec Larson
By Alec Larson
July 6, 2019
​The two sides are attempting to complete the draft before Sunday, when Germany and Qatar will be co-sponsoring an all-Afghan peace conference.
SHOW TRANSCRIPT

U.S. Special Representative for Afghanistan Reconciliation Zalmay Khalilzad says recent rounds of peace talks with the Taliban "have been the most productive session to date."

Negotiators from the U.S. and the Taliban are attempting to solidify a draft agreement that could lead to the removal of American and NATO troops from Afghanistan.

Khalilzad said in a tweet that they "made substantive progress on ALL 4 parts of a peace agreement: counter-terrorism assurances, troop withdrawal, participation in intra-Afghan dialogue and negotiations, and permanent and comprehensive cease-fire."

This most recent round of talks between the Taliban and the U.S. began on June 29 in Qatar, with the aim of withdrawing foreign troops from Afghanistan. The U.S. refuses to pull out its troops without security guarantees, such as opening a dialogue with the Afghan government and implementing a cease-fire.

Nearly 17,000 foreign troops are currently stationed in Afghanistan, with 14,000 from the United States.

The U.S. has denied previous reports that the country is looking at an 18-month fixed deadline to pull the troops.

Khalilzad said that talks between the two sides would pause in support of the all-Afghan peace conference Sunday and will resume on July 9.

Last month, Secretary of State Mike Pompeo expressed hope that an agreement could be reached before Sept. 1.