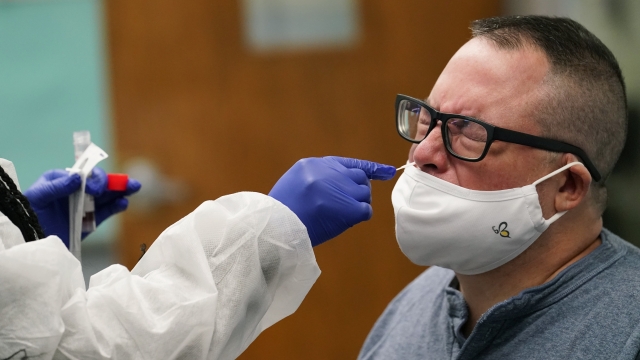 More than 9 million Americans have now been infected with COVID-19, as of Friday. That's the most of any country. And rates of new infections are outpacing new tests, meaning more testing is not the reason why.

U.S. deaths have topped 229,000, according to Johns Hopkins University. An influential model from the University of Washington School of Medicine now says the U.S. will likely see another 270,000 deaths by February.

Despite the multistate surge, President Trump insists things are getting better.

"We're doing very well with respect to making the turn on the pandemic," President Trump told reporters Friday while leaving the White House for campaign events. "We're working very hard on that."

America's heartland is seeing the steepest surge, but no state is immune. According to the COVID Tracking Project, 41 states saw at least a 10% increase in cases this week compared to the week before. Kentucky has now topped 100,000 cases -- about one-tenth of them have come in the past week.

"We are seeing a third escalation in Kentucky right now that is really concerning," Kentucky Gov. Andy Beshear said. "The pace of the way cases are growing is more exponential than we have seen in the past, our hospitalizations are going up, individuals in the ICUs are going up and, sadly, we are losing more people."

And there's still a shortage of PPE. A report released this week from the U.S. Public Interest Research Group found nearly 3,000 nursing homes have less than a week's worth of PPE in stock.

"The public health experts say right now that the problem isn't that we don't have the right rules in place, it's that people aren't following them," Beshear said.

"It's fatigue, honestly. It's folks — who could blame them, but they're getting sick and tired of having to deal with this and we are preaching — by the way, therefore, a lot of the cases are coming from private homes, private gatherings," New Jersey Gov. Phil Murphy said. "So we're leaning in on our bull horn as we're surging testing and tracing and enforcement, we're just as importantly telling people, listen, you can't let your hair down. This is still with us."