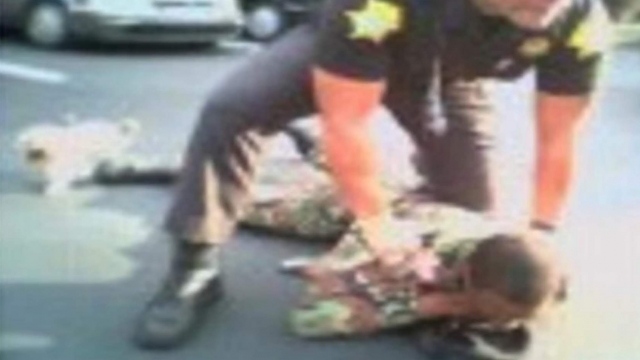 With multiple killings of African Americans by White police officers in the spotlight, the secretary of the Army tells Newsy the military is looking into what can be done to keep Black soldiers safe when they come into contact with local police.

Newsy's Terace Garnier: "So, are you considering making some sort of unified-type training that could go over those things, especially with the climate that we're dealing with right now?"

What the training will entail has yet to be determined. But Black veterans I spoke to say the problem is urgent.

“Everyone wants to fight for the flag, and they claim the flag stands for freedom, liberty and justice for all. Well, as a Black person in America, we don't have none of the three. I don't have freedom. I don't have liberty, and I damn sure ain't getting justice," Carlos Martin said.

Sgt. Carlos Martin was coming home from a uniform inspection on Fort Jackson in 2005 when he says he was attacked by a South Carolina police officer.

Court documents and police reports reveal Martin, who had just returned from Germany, was arrested by this man: Deputy Ben Fields. He may look familiar.

He’s the same officer seen in this viral video body-slamming a teenage girl in a classroom 10 years later.

Martin, who has since made a short film documenting his experience, says Fields was responding to a noise complaint.

After asking for his ID, Martin says Fields threw him to the ground, beat him and emptied an entire can of pepper spray on him while another officer threw his wife against the car after she was spotted taking photos with her cellphone. The attack was allegedly provoked by Martin calling Deputy Fields, “Dude”.

“He's like, 'He won't be addressing me as "dude". I'm a Richland County officer of the law.' I said, 'Well, sir, you address me by "Hey, you".' He said, 'Well, that's because I don't know your name.' 'Well, hell, I don't know your name either.' And I move my hands up, and that, you know, the officer tackles me, he's clamping down to the ground. He starts beating on me and puts one of my arms behind my back,” Martin said.

According to police reports, Fields admitted to using “racial slurs” when arresting the uniformed Army sergeant.

“After they arrested, ... I went down to the precinct to be fingerprinted, to take my mugshots. I'm senior taking a mugshot a military uniform. What kind of mess is that?” Martin asked.

According to this memo from Richland County Sheriff’s Department Internal Affairs, there was not enough evidence “to prove or disprove” excessive force was used during the altercation.

Martin and his wife were both charged with resisting arrest, but those charges were dropped. The Army veteran says his wife then took the officers to court for excessive use of force.

The civil lawsuit made its way to the 4th District Court of Appeals, but the judge ruled in favor of the officers due to qualified immunity.

“I would like for him to be charged the same way as anyone else is charged. If I go out and I'd be the person or actually the person that way, he should be convicted, just like a civilian should be convicted. But they have the badge has his own set of rules that protect them," Martin said.

Unable to afford an attorney, Martin says he never had his day in court. When I asked what he feels his chain of command should have done when he told them about the incident, this is what Martin had to say:

Army Secretary McCarthy told Newsy the military is currently giving service members advice on how to avoid trouble with the police, but has no plans as of now for more formal training.

“I don't know if, specifically, like, a particular professional military education regimen, but they are the types of things we talked to soldiers when they when they go out on the weekends and give safety briefings about how to carry themselves," McCarthy said.

Newsy spoke to former military leaders and a former military attorney, and they all said databases or records about incidents like this are rarely kept. If they are, they are usually destroyed after a set amount of time.