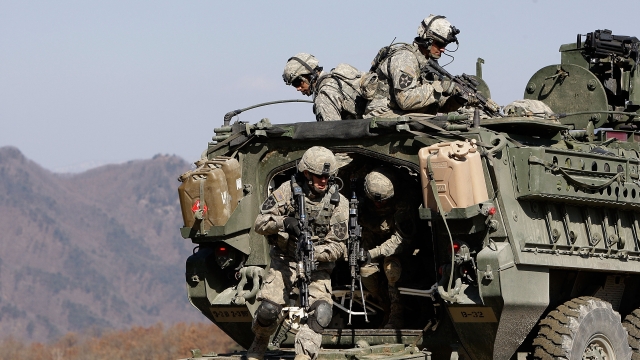 SMS
U.S. Soldier Stationed In South Korea Has The Coronavirus
By Katherine Biek
By Katherine Biek
February 26, 2020
U.S. Forces Korea said the 23-year-old soldier has quarantined himself inside his off-base residence.
SHOW TRANSCRIPT

An American soldier stationed in South Korea has been diagnosed with the coronavirus.

U.S. Forces Korea said the 23-year-old soldier has quarantined himself inside his off-base residence. He's stationed at Camp Carroll in the southern part of the country. It's near the city of Daegu, which has seen a recent surge in coronavirus cases.

The coronavirus has killed at least 12 people in South Korea and infected more than 1,260 others. The country has the second-largest outbreak of the virus, after mainland China.

The South Korean government raised the country's threat alert to the highest level possible over the weekend, allowing it to close schools, restrict public transportation and even lock down cities.

U.S. Forces Korea has also introduced a number of preventive measures on its bases across the country, including implementing health screenings, reducing entry points and restricting off-base activities.

Multiple groups around the world are working to develop vaccines for the coronavirus. One company in Massachusetts shipped vials of its experimental version to U.S. government researchers for testing. Multiple outlets say clinical trials for the vaccine could start in April.