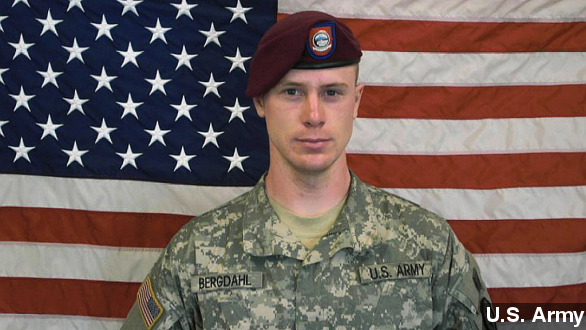 By Matt Picht
May 31, 2014
After spending nearly five years in captivity, U.S. Sgt. Bowe Bergdahl was freed Saturday in a prisoner exchange with the Taliban.
SHOW TRANSCRIPT

Sgt. Bowe Bergdahl, the only U.S. soldier still held captive in Afghanistan, has finally been released after almost five years in captivity.

The Obama administration announced Saturday Bergdahl was handed over to the U.S. military by Taliban representatives in Afghanistan, in exchange for five detainees from Guantanamo Bay. (Via CNN)

Berghdahl was captured by the Taliban after reportedly leaving his base in June 2009. His captors periodically released proof of life videos showing Bergdahl was indeed alive — the latest came in January of this year. (Via Al Jazeera)

One defense official told reporters just after Bergdahl boarded an American helicopter, he grabbed a paper plate and scrawled the letters "S.F.?" to find out if his rescuers were American Special Forces. "One soldier yelled back, 'Yes, we've been looking for you for a long time,' at which point, the official said, Sergeant Bergdahl broke down crying." (Via The New York Times)

In a statement, President Obama called Bergdahl's release "a reminder of America's unwavering commitment to leave no man or woman in uniform behind on the battlefield." Obama also thanked the Amir of Qatar and the government of Afghanistan for assisting in negotiations about Bergdahl's release. (Via The White House)

The names of the five Guantanamo detainees released in exchange for Bergdahl were also made public Saturday. The Washington Post reports, for years, the Taliban has been negotiating for the release of these prisoners, most of whom were Taliban government officials before the Afghanistan War.

And while the U.S. is expressing near-universal relief at Bergdahl's safe return, the president's usual critics are questioning the administration's decision to swap prisoners with the Taliban.

"They wouldn't be in Gitmo if they weren't serious actors on the bad guy side. ... I believe unfortunately, Americans are going to pay a price, somewhere, somehow, some time, out of some of these if not all of these five guys." (Via Fox News)

Secretary of Defense Chuck Hagel sought to settle those fears in his own statement, saying the U.S. would work with Qatar to make sure national security isn't compromised. The detainees will be held in Qatar for one year before release. (Via U.S. Department of Defense)

Residents of Bergdahl's hometown of Hailey, Idaho had been planning a June 28 concert to raise awareness of the soldier's plight. Organizers say the concert will still happen and will be "the biggest welcome-home party the country has ever seen."