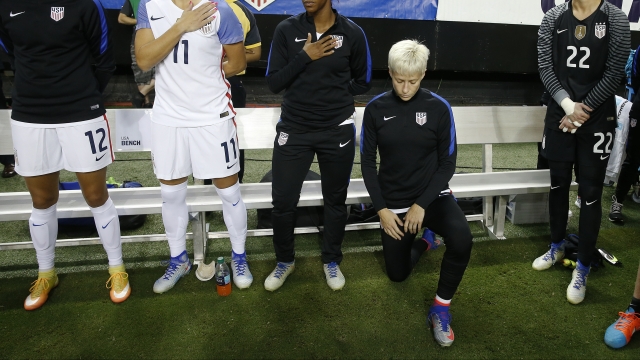 SMS
U.S. Soccer To Revisit Ban On Kneeling During National Anthem
By Bailey Vogt
By Bailey Vogt
June 9, 2020
ESPN reports the USSF board met to discuss allowing kneeling as a form of protest.
SHOW TRANSCRIPT

The U.S. Soccer Federation's ban on kneeling during the national anthem could be overturned this week.

Sources tell ESPN the soccer federation's board met Tuesday in a conference call to discuss plans to allow kneeling as a form of protest.

The change comes in the wake of George Floyd's death in police custody and the racial inequality protests that have followed.

The policy was adopted in 2017 after Megan Rapinoe, a player for the U.S. women's team, took a knee before a game in 2016. Her protest was to support then-San Francisco 49ers football player Colin Kaepernick, who popularized the form of protest.

The women's team put out a statement Monday, calling out the federation for trying to "silence" the message four years ago and advocating for its repeal.

"Until USSF does so, the mere existence of the Policy will continue to perpetuate the misconceptions and fear that clouded the true meaning and significance of Colin Kaepernick, Megan Rapinoe and other athletes taking a knee," they said.

The board's vote is expected to take a formal vote on Friday and the new rule would go into effect immediately. However, it would again need approval by the federation's National Council this fall.