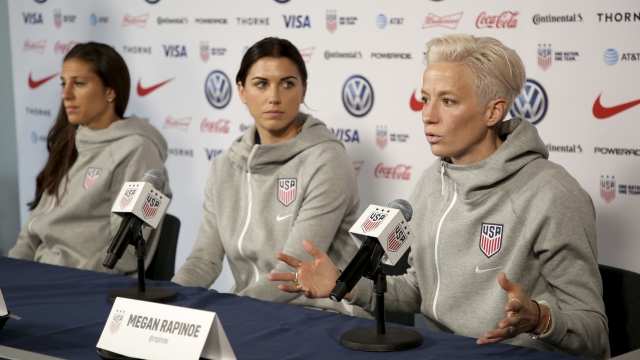 The U.S. Soccer Federation denied discriminating against the U.S. Women's National Soccer Team in a filing on Monday.

In the document, U.S. Soccer said that men's team players have "more responsibility" and that biological differences mean men have "a higher level of skill based on speed and strength" than women. It also says the two teams have "materially different working conditions" and that the men's team faces more hostility at matches than the women's team.

This stems from a gender discrimination lawsuit that the USWNT filed last year. The women have demanded equal pay, arguing they bring in more revenue for U.S. Soccer and have won more titles than their male counterparts. The women's team has won three World Cup titles and four Olympic gold medals; the men's team has never won a World Cup or an Olympic gold.

USWNT spokesperson Molly Levinson responded to Monday's filing, saying U.S. Soccer's argument is "just plain simple sexism and illustrates the very gender discrimination that caused us to file this lawsuit to begin with."

Levinson said the women's team looks forward to the trial, which is scheduled for May 5.