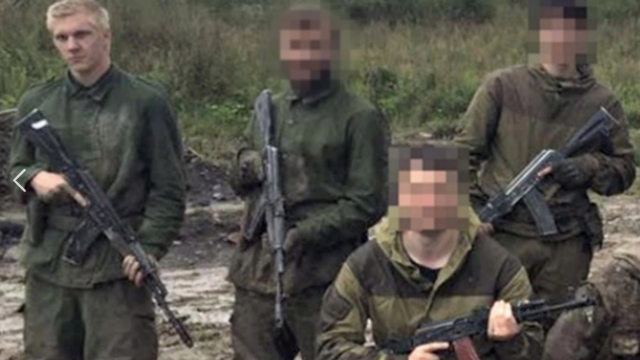 Among those fighting against Ukraine are members of the Russian Imperial Movement, or RIM.

RIM, and three of its senior members, were the first and only White supremacists designated as terrorists by the U.S. government in 2020. That happened under the Trump administration, and now joining that list of 'specially designated global terrorists', is Alexander Zhuchkovsky.

The Department of Treasury says he “has raised over 200 million rubles to purchase weapons and military equipment” to support RIM and other pro-Russian fighters in eastern Ukraine.  In a statement the department said he even helped fighters to travel there.

Another newly designated terrorist is Stanislav Shevchuk. In 2017, he traveled to the U.S. to build networks for RIM inside America with the far-right. He's seen in a photo holding up a Russian imperial flag in front of the White House. Next to him in the photo is Matt Heimbach, a prominent Neo-Nazi leader at the time the picture was taken.

RIM earned its terrorist designation in part by operating military training camps for extremists and others in St. Petersburg. 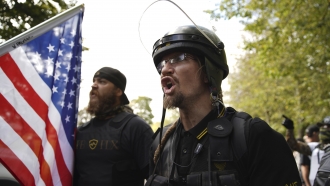 In our podcast, Verified: The Next Threat, the group's leader Stanislav Vorobyev told us — after the designation — that the weapons and explosives training continues as he focuses now on rallying white supremacists around the world for a new international religious conflict he calls "The Last Crusade."

STANISLAV VOROBYEV: We are bringing an idea. This is what makes us dangerous for some people. To those guys who recognized us as terrorists, our ideas are what make us dangerous.

NEWSY'S MARK GREENBLATT:  Is it fair to say that you’re still connected with Americans in the U.S. who are like-minded in one shape or another.

VOROBYEV: Yes, you can say so.

Almost a year ago now, Newsy sat down for a rare interview with top counter-terrorism officials at the State Department. We asked about their lack of designations linked to two Swedish Neo-Nazis from the Nordic Resistance Movement, who flew to RIM’s military style training camps in St. Petersburg, and returned home to bomb a series of left-wing and immigrant targets.

Neither the bombers nor the group were ever labeled as terrorists.  Newsy asked the Department of State’s Hillary Batjer Johnson about the group, and its members who attacked.

GREENBLATT: They were convicted of taking bombs and placing them at refugee centers. ... I mean, how are they still out there, undesignated?

HILLARY BATJER JOHNSON: Well, I'm not going to comment about a specific group or entity or individuals.

Batjer Johnson oversees the terrorist designations unit at the Department of State’s Bureau of Counterterrorism.  At the time of the interview she acknowledged her team felt frustration.

"They would love to be able to deploy this tool everywhere," said Batjer Johnson.   "We just don't have the resources and staff and the information."

Now that appears to have changed. 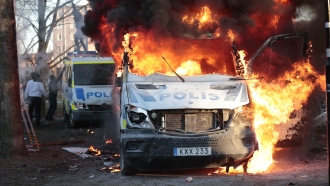 In a statement Wednesday, the department said, "the U.S. government remains deeply concerned about the evolving racially or ethnically motivated violent extremist (REMVE) threat worldwide" — and said it would designate one of the Swedish bombers as a terrorist.

A Swedish court convicted Anton Thulin for the bombings after his release from prison. The U.S. government says he went on to “receive additional paramilitary training in Poland, before he was expelled by Polish authorities who cited the “serious, real, and current threat to security and public order” he posed.

The State Department said that the moves this week would isolate the newly named individuals and open up new authority for law enforcement to track their moves.