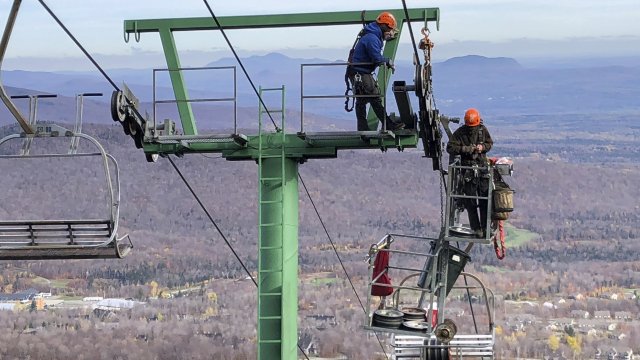 Thanksgiving is typically the first big ski holiday in the West but a lack of snow has some resorts on hold.

A dry spell in Colorado is leaving slopes — that would typically be packed — still waiting for that first big snow dump.

Only a handful of ski resorts in Colorado are open and most of those are only running a couple of lifts as they rely on man-made snow.

Aside from environmental issues and pandemic requirements, skiers are also facing higher prices. But it's not deterring everyone from hitting the slopes.

Thomas Seabrook has owned Black Diamond Ski and Cycles in Georgetown, Colorado for 12 years. He says there have been more preseason customers this year than any year he's been in business.

In Lake Tahoe — near the California-Nevada border — a dry early season forced the Heavenly and Northstar resorts to postpone their openings. But they're welcoming a much-needed winter snowstorm this week.

In Utah, man-made snow allowed a return to some slopes. At Brighton, the warmer weather and lack of flakes delayed the lifts until this week but now they're ready.

Another issue facing ski resorts is the pandemic. The National Ski Areas Association estimates the industry suffered a $2 billion hit last year as the coronavirus kept skiers away and resorts closed or operating at a limited level.

While the pandemic hampered the industry, some measures brought out some interesting benefits like cutting down the wait in rental and ticket lines. There could also be more to-go food option and increased outdoor dining areas to reduce overcrowding.

Policies may change from one resort to another. Masks may not be required outdoors but could be required in gondolas heading up the mountain.

It's also good to know if proof of vaccination will be needed to dine at specific restaurants on the resort.

Overall, if you're planning on hitting the slopes this winter, it's important to do your research and planning before you pack up those skis and head to the mountains.