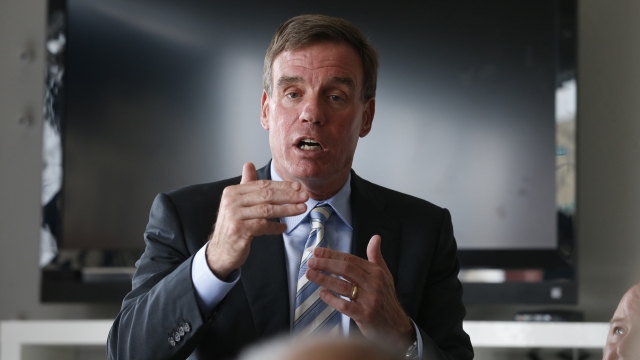 ALEX LIVINGSTON: Welcome Senator Warner, thank you for taking the time today. So what do you hope and anticipate this [the U.S. ban on Russian oil] will do to Russia as it continues its aggression in Ukraine? I mean, is this more of a symbolic thing? Is it really going to deter Putin from moving forward and doing anything else?

SENATOR MARK WARNER: Well, it is partially symbolic,  we do not rely on very much Russian oil. But I think it's important that we're sending a signal that, you know, we don't want to continue to fund Putin's invasion of Ukraine.

These dollars that, when we buy Russian oil, go directly into Russian state coffers that fund the war, and I think it is important that we move, I think. I'd love to see the Europeans move as well, and I think some of them will. But remember, so far, when we cut off trade to Europe, a trade with Russia, we only trade about $28 billion a year, the Europeans trade about 10 times that much. So already, the sanctions that are in place against Russia, from both U.S. and Europe are hurting Europeans more, we're glad to see the Nord Stream pipeline shutdown, that very much hurts Germany's long term energy supplies. So I think it's good to show that we're doing more than simply sending weapons. Putting the sanctions in place, standing up on Russian oil is terribly important.

I would just say, I think about the earlier, I saw the clip earlier about some of the debates going on down in Florida. In many ways, what we're talking about right now is we're standing with the people of Ukraine, because the people of Ukraine are literally voting with their lives, trying to say they want to oppose authoritarian governments. They want to stand for kind of Western values around freedom, freedom of expression, freedom of the press, all things that have disappeared in Russia ruled by Putin.

I fear at times there's clearly authoritarian tendencies even happening in this country. So, I think this is the time to stand with the people of Ukraine, and that means cutting off Russian oil, and that may end up meaning slightly higher gas prices for a while, I think it's a sacrifice worth making.

ROB NELSON: To that exact point Senator, polls show right now that most Americans are willing to pay more at the pump because they believe that America is doing the right thing when it comes to to aiding Ukraine. But after a while everyone's patience will wear a little bit thin, gas was already high because of pandemic related inflation, so what can the feds do to kind of ease the pain a little bit at the pump? Because there is a lot of discussion right now about slashing the federal gasoline tax, which would save a lot of us some money, is that likely to happen? Do you think?

WARNER: Well, again, I think one of the things that policymakers, — and frankly, the President — need to do a better job on, is explaining why what is happening in Ukraine is relevant to all Americans. Vladimir Putin is an autocrat, he's a bully, he's not going to settle for simply getting rid of the democratic government in Ukraine.

My theory is he's trying to put back together the old Soviet Union, many of your viewers are young, they didn't have to live through what we call the Cold War until the fall of communism in 1989. So if we don't stand up to him now, and whether an authoritarian government in Russia or the authoritarian government led by the Communist Party in China, we're going to see the spread of these kind of authoritarian regimes.

In terms of overall gas prices, I think it's important that we go ahead and release some of the strategic energy reserves, I think the President's released 30 million barrels of oil, I would be supportive of him increasing some more.

WARNER: It has taken us years to fund infrastructure. To cut off that critical funding of infrastructure I think it would be potentially a mistake, because shutting it off is easy, turning it back on could be a real challenge.

LIVINGSTON: So, when we're talking about the U.S. involvement in what's happening in Russia and Ukraine, and we were kind of talking with a guest yesterday who said that a ban on Russian oil, it's maybe coming a little bit too late at this point. We were talking about the war in the air, and I just wanna give you some numbers really quickly. Active helicopters in Russia, more than 1,500 compared to 15 in Ukraine combat aircraft. 1,500 for Russia, 98 for Ukraine. We know that the U.S. is going to be sending some fighter jets to Poland to then send their fighter jets to Ukraine. Is that enough? Is the U.S. doing enough coupled with this ban on Russian oil? Are we doing enough?

WARNER: Well, if you look at what's happened over the last two weeks, we now have in process of going to Ukraine, I read a number yesterday 17,000 anti-tank javelins. That's from us and some of our European allies. We have seen Germany shut off Nord Stream too, we've seen Vladimir Putin individually sanctioned, that rarely happens. We have sanctioned the Russian Central Bank, even countries like Switzerland, which have been always neutral, have joined in.

I think that only happens both because of the courage of the Ukrainian people, but also because of actually strong leadership, from the Biden administration moving allies along, we finally got somebody standing up to Putin rather than, frankly, the previous president kissing up to Putin.

I think that rebuilding the alliances is terribly important. One of the things that we've known from day one was the idea that, even with additional military aid, that the Ukrainian forces, long term, can stand up against the Russian forces, is probably a bridge too far. But what we have seen from the Ukrainians is that if the Russians take over parts of their communities, they are going to continue to fight back in an insurgency.

NELSON: Let me switch gears to a different topic before we let you go, I know you're on a tight schedule today.  You've kind of emerged as a leading critic of social media and the tech industry in our country, and you really feel strongly that the feds should step in to better regulate that industry. Where does the conversation stand in terms of the feds more strongly regulating that sector? Where are we?

WARNER:  Well, you know, it's not just the federal government. We have acknowledged [as] Congress, we have completely whiffed at this. You know, it's been six years since Russians interfered in our 2016 elections. We've seen enormous amounts of misinformation,disinformation, what has Congress really done?

Not trying to not get rid of social media by any means, just put some guideposts along the way.

Banning misinformation, trying to make sure political content has the same reporting requirements they'd have if an ad was placed on your station. Allowing people, if you get tired of Facebook, to move your data easily to new sites. These are common sense things. Trying to restrain, and make sure that what is called Section 230, which basically means that anything that appears on Facebook has no restrictions at all, in terms of you could criticize somebody in real life and violate civil rights laws, you can make the same criticism posting. Facebook is totally protected by what's called Section 230, Google or others. We've done nothing, I think we need to do more.

We have seen the social media companies, at least in response to what's happening in Ukraine, say, okay, they're going to take down some of the Russian sites, they're not going to allow Russia to make money on social media during this invasion. But we have been, sadly, pretty absent, and I've got a series of bipartisan bills. I really, really wish that they would rise higher to the top of the agenda. But so far, our actions or the federal government's actions have been a big fat zero.