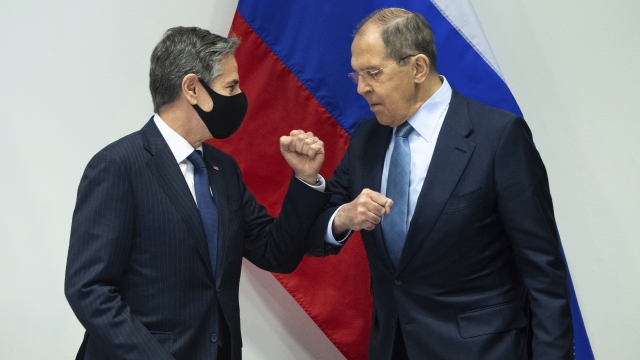 SMS
Secretary Of State Antony Blinken Meets With Russian Foreign Minister
By Simon Kaufman
By Simon Kaufman
May 20, 2021
Blinken said there are many areas where interests overlap and threatened action against any Russian aggression toward the U.S. or its allies.
SHOW TRANSCRIPT

The U.S. is addressing rising tensions with Russia.

Biden administration officials reiterated willingness to respond against Russia if it acts aggressively.

Secretary of State Antony Blinken met with his Russian counterpart in Iceland yesterday and spoke about the relationship between the two countries.

"It's also no secret that we have our differences," Blinken said. "When it comes to those differences – as President Biden has also shared with President Putin – if Russia acts aggressively against us, or our partners, our allies, we'll respond."

During talks, Blinken also said there are many areas where U.S. and Russian interests overlap, including issues of the pandemic, climate change and dealing with nuclear programs in countries like Iran and North Korea.

He says the two countries can work together on those shared interests.

President Biden is expected to meet with Russian President Vladimir Putin next month.