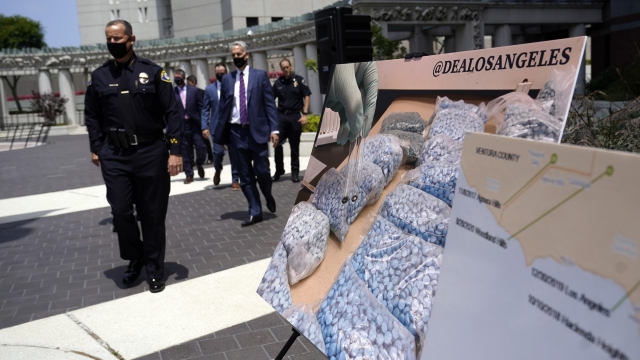 Los Angeles public schools will stock campuses with the overdose reversal drug naloxone in the aftermath of a student’s death.

It's a terrifying sign of the times after seven teens overdosed, one of them dying on campus.

"Our system has been deeply impacted by the injury to some students and the death of at least one student as a result of an unacceptable level of availability of narcotics and opioids in our community," said Alberto Carvalho, the superintendent of Los Angeles Unified School District.

Schools near Vail, Colorado have also been carrying the medication as of this school year. The same goes for schools in parts of Oregon and Texas.

All over the country, there's a rush to stock schools with a life-saver as more young high schoolers die taking fentanyl-laced drugs.

"They're even packaging it in colored pills, presumably to make it attractive to a younger and younger group," said Chief Greg Dull, at Excelsior Springs, Miss. Police Department.

In Kansas City Sarah Manser put up a billboard trying to get parents' attention after her son died from fentanyl poisoning.

"He was kind, he called me mama. I miss that, you know," said Manser. "If I can even stop one person from overdosing, I will definitely."

As drug overdoses are on the rise across the nation, more states are beginning to decriminalize fentanyl testing strips.

In nearby Clay County, Missouri, detectives are trying desperately to stop the flow of pills into teen groups and schools.

"I've never seen anything like it in my 24 years. Ever. So that's the hard part. You know, I hate to say it but it's almost triage, that's the way we're dealing with it right now," said Michael Nelson, a detective at Clay County, Miss. Sheriffs' Office.

The DEA is trying to raise awareness among parents and kids about dealers hawking pills on social media.

What might just seem like illegal painkillers, are laced with fentanyl — a synthetic opioid 80 to 100 times more powerful than morphine.

"Your kid could be on social media or in their bedroom, where you think they're safe, ordering an illicit pill that's ultimately gonna lead to an overdose and to them being killed," said Orville Greene, a special agent in charge at the Detroit Field Division of the Drug Enforcement Agency.

In schools the education is paying off.

"We would have lost one of our students," said Guilkey.

At a school near Kansas City, a nurse treated a students' overdose only because a teacher knew what to look for.

"You hear about these things; you just don't think it will happen in your school," said Guilkey.

It's proof that education works. It's just a matter of stopping the drug's flow.

That's something that's taxing law enforcement at the southern border.

"We're finding packages floating in gas tanks and in drive shafts, we're getting people carrying strapped to their body. Even inside human bodies," said Michael Humphries, the Nogales Port director for U.S. Customs And Border Protection.

It's frustrating law enforcement from California to Florida and everywhere in between. It's coming down hard on the country's kids and students who should be getting textbooks, not overdose treatments.