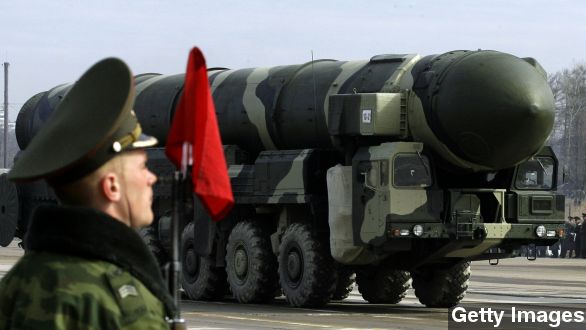 By Matt Picht
July 28, 2014
Western leaders agreed to a fresh round of sanctions against Russia, who the U.S. claims broke a 1987 arms treaty by testing cruise missiles.
SHOW TRANSCRIPT

Western nations are ratcheting up sanctions on Russia over the conflict in Ukraine, and the U.S. is airing a long-held grievance at for the first time. In a letter delivered to the Kremlin Monday, President Obama accused Russia of violating a 1987 nuclear missile treaty.

Russia is accused of violating the Intermediate-Range Nuclear Force Treaty, signed by President Reagan and Soviet leader Mikhail Gorbachev, which prohibits the use of certain types of ballistic or cruise missiles. The I.N.F. treaty helped ease tensions between America and the Soviet Union and is seen as a symbol of the end of the Cold War. (Via C-SPAN, U.S. Department of State)

The Obama administration alleges Russia tested cruise missiles banned by the treaty as far back as 2008. The New York Times reports the U.S. has been examining the alleged violations since 2011, and quietly informed NATO allies of the potential breach by 2013. (Via Getty Images)

National Review points out the Obama administration has skirted publicly confronting Russia about the breach until Monday, previously giving Russia "a clean bill of health."

The announcement comes the same day leaders from Britain, France, Germany, Italy and the U.S. agreed to a fresh round of sanctions on Russia "for its continued transfer of arms, equipment, and fighters into eastern Ukraine, including since the crash [of Flight MH17]." (Via Getty Images, The White House)

The exact terms of those sanctions are expected to be announced after an E.U. summit on Tuesday, but The Wall Street Journal reports they're likely to target the broad sectors of Russia's financial and technology sectors, and could include several of Russia's super-rich oligarchs.

Russia has denied violating the I.N.F. treaty in the past, saying it had investigated the accusation and considered it closed.