U.S. Sanitation Could Be Difference In Containing Ebola 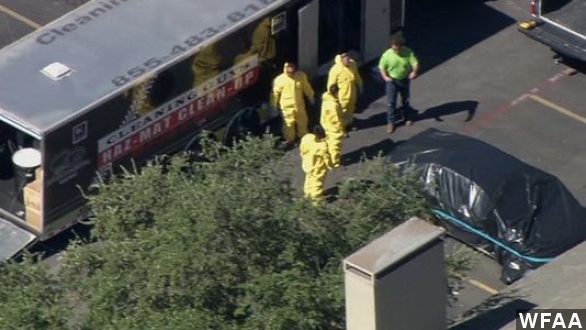 SMS
U.S. Sanitation Could Be Difference In Containing Ebola

By Madison Burke
October 3, 2014
Some hope sanitary practices in the U.S. will help the country contain Ebola — a feat that has proven difficult elsewhere.
SHOW TRANSCRIPT

In an effort to contain the Ebola virus, a hazardous materials team has sanitized the apartment where the four family members of U.S. Ebola patient Thomas Eric Duncan are in quarantine.

Duncan was hospitalized in late September after returning to the country from Liberia. He was eventually diagnosed with Ebola and is said to be in serious but stable condition.

The hazmat team collected the sheets, towels and other materials Duncan came in contact with while he was staying in the apartment. The apartment was supposed to be sanitized Thursday, but those plans were delayed because of permit issues regarding the transfer of hazardous waste.

There has been a lot of media discussion about how sanitary practices like these set the U.S. apart from other countries facing Ebola.

MAGGIE FOX VIA MSNBC: "The Americans who have been treated here all survived because of the good medical care they got. In Liberia, in Sierra Leone, in Guinea, that care is not available."

ALAN COLMES VIA FOX NEWS: "We don't automatically trust the government, but I certainly trust our physicians who know what they're doing."

And a CNN reporter noted the fact that none of Duncan's family members in quarantine have exhibited signs of Ebola could be a good sign the U.S. is having success in containing the disease.

MARTIN SAVIDGE VIA CNN: "That is great news because if they're not showing symptoms, in theory no one has Ebola there and no one is in danger of transmitting the disease to anyone else."

Meanwhile in Washington, another possible Ebola case in the country has been reported. Howard University Hospital has confirmed it's treating a patient with symptoms that could be associated with Ebola.

The hospital says the patient, who had recently traveled to Nigeria, is receiving medical treatment in isolation.

That patient has not been identified but is said to be in stable condition.

This video includes images from the City of Dallas and Getty Images.