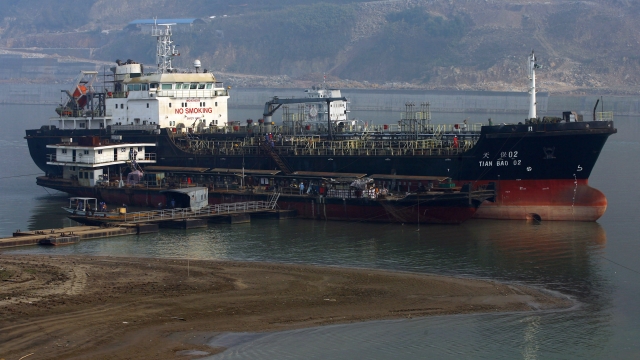 SMS
U.S. Steps Up Sanctions On Chinese Companies Over Iran Oil Imports
By Peter Hecht
By Peter Hecht
September 26, 2019
The actions against China come amid tensions over drone strikes on Saudi oil fields that the U.S. blames on Iran.
SHOW TRANSCRIPT

The U.S. is taking action against Chinese companies and executives it accuses of "knowingly transporting oil from Iran" in violation of American economic sanctions.

Secretary of State Mike Pompeo made the announcement Wednesday. It comes amid tense discussions among multiple countries at the U.N. General Assembly over the recent drone strikes on oil fields in Saudi Arabia.

Houthi rebels in Yemen claimed responsibility for the Sept. 14 incident and Iran denied involvement. But the U.S. and Saudi Arabia say the weapons used and the sophistication of the attacks "unquestionably" point to an Iranian operation.

Now U.S. actions against China, amid an ongoing trade war between the two powers, add another dimension to the Iran matter.

In July, the Trump administration placed sanctions on a Chinese oil trading company and its chief executive for purchasing Iranian oil in violation of U.S. restrictions. Now Pompeo says the U.S. is ramping up penalties against companies in China, the largest buyer of Iranian oil.

"Today we are imposing sanctions on certain Chinese entities for knowingly transporting oil from Iran, contrary to United States sanctions. Importantly we are also imposing sanctions on the executive officers of those companies as well. And we're telling China and all nations: Know that we will sanction every violation of sanctionable activity.”

A Chinese foreign ministry spokesman said Thursday the U.S. cannot impose "unilateral sanctions" on China's trade with Iran. He said: "We also oppose the bullying practice of the U.S. China's cooperation with Iran is legitimate and legal and should be respected and protected."

China's largest supplier of crude oil is Saudi Arabia, not Iran, the Saudis' bitter rival. And under U.S. pressure, the Chinese are importing more Saudi oil. Saudi Arabia and Iran are backing different sides in Yemen's bloody civil war, which has claimed more than 90,000 lives since 2015.

U.S. and Iranian tensions have been rising since President Trump pulled out of a six-country accord that promised to lift economic sanctions if Iran curtailed nuclear production and agreed to international monitoring to prevent weapons development.

The U.S. has since accused Iran of bombing four oil tankers, shooting down a U.S. surveillance drone and carrying out the Saudi oil attacks. Yet President Trump said at the U.N. General Assembly this week that Iran "would like to negotiate" with the U.S. "but we have not agreed to that yet."

But in a U.N. address, Iranian president Hassan Rouhani said: "The government and people of Iran ... will never negotiate with an enemy that seeks to make Iran surrender with the weapon of poverty, pressure and sanctions."