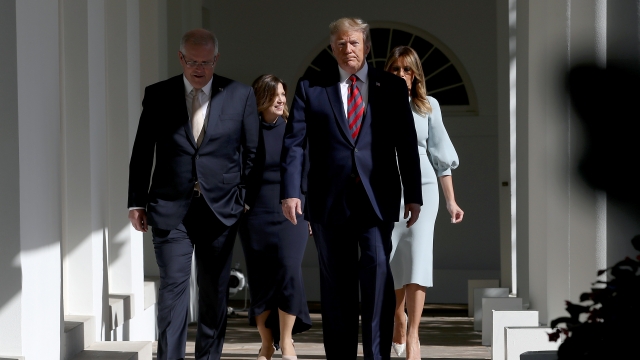 "We have just sanctioned the Iranian National Bank. That is their central banking system, and it's going to be at the highest level of sanctions," the president said.

On Friday, President Donald Trump announced the U.S. sanctioned the Central Bank of Iran and two other major financial institutions.

The U.S. had previously sanctioned the Central Bank of Iran for money laundering and secret military activity. This time, it was for terrorism.

Iranian-backed Houthi rebels in Yemen have already claimed responsibility for attacking a Saudi Arabian oil facility on Sept. 14. But, both the U.S. and Saudi Arabia believe Iran is actually responsible for the attacks. President Trump noted the attacks as the reason for the heightened sanctions.

He said, "they are broke. And they could solve the problem very easily. All they have to do is stop with the terror."

Iranian Foreign Minister Mohammad Javad Zarif said the new sanctions on the Central Banking System are "a sign of U.S. desperation. ... When they repeatedly sanction the same institution, this means their attempt at bringing the Iranian nation to its knees under 'maximum pressure' has failed."

Zarif also called the sanctions a "dangerous and unacceptable attempt" at hindering Iran's ability to provide food and medicine for its people.

To end the new sanctions, the Central Bank of Iran must prove it has stopped sending money to terrorist groups.