Reliance On Russian Oil Imports Could Have Impact On U.S. Gas Prices 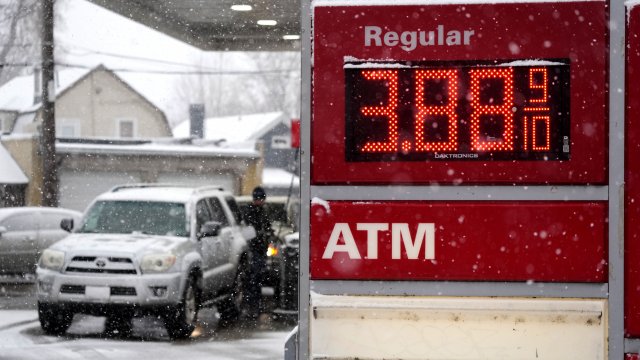 SMS
Reliance On Russian Oil Imports Could Have Impact On U.S. Gas Prices
By Isbella Diaz
By Isbella Diaz
February 16, 2022
Earlier this month, oil prices surged to $97 a barrel, which is their highest level since 2014.

From crude oil rigs to the gas that ends up in your tank, it's typically a long process that begins thousands of miles away.

We picture scenes like oil rigs in Saudi Arabia. Barrels filled to the brim and shipped to the U.S. But that crude oil also comes from places like oil fields in western Siberia.

Russia accounted for 11% of crude oil imports to the U.S. between January and October last year, surpassing even Saudi Arabia.

Now, with a conflict brewing in eastern Europe, the U.S. reliance on Russian petroleum could come to a brutal head. At the center of it all: the threat of a Russian invasion of Ukraine and the global sanctions that would follow.

"We've lived with this incredible stability in Europe for a very long time and I think we've taken that for granted," said Fritz Mayer, University of Denver's Dean of the International Studies Program.

A comment that rings more and more true as we look at the rising costs of oil. Especially with Russia being the third largest oil producer in the world.

"Putin is making money off this crisis. If you look at the price of oil," said former National Security Adviser John Bolton.

Earlier this month, oil prices surged to $97 a barrel, which is their highest level since 2014. And analysts at JPMorgan say that could quickly rise to $120 a barrel if Russia invades Ukraine.

"He's calculating across a broad range, not simply focusing on Ukraine," Bolton continued. "If this could be a shell game, he could be focused on something else."

What does that mean here in the States? Well, if the price of a barrel goes up to even $100, gas prices will hit a nationwide average of $4 a gallon, which is up from about $3.50 today.

Meanwhile, global demand for oil is only ramping up. The world's leading energy companies say they're nowhere near prepared.

"We are not on track," said International Energy Forum Secretary General Joseph McMonigle. "Global energy consumption has roared back to pre-pandemic levels, including demand for fossil fuels."

That more than likely means prices will follow suit.

And as the global community prepares for what increasingly seems to be an inevitable war in eastern Europe.

Americans looking at the pump should be prepared for what's coming here at home.