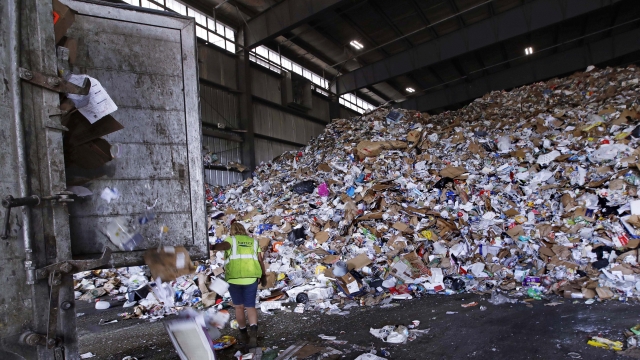 SMS
The Ugly Truth About U.S. Recycling System: It's Garbage
By Shira Tarlo
By Shira Tarlo
April 22, 2021
Recycling is more popular than ever in the U.S., but the logistics of actually meeting that demand are murky.
SHOW TRANSCRIPT

Recycling in America is in a precarious place these days — more popular than ever, but without a clear path ahead on logistics.

"It's a cultural issue because most people don't really want to deal with recycling," says Nilda Mesa, director of the Urban Sustainability and Equity Planning Program at Columbia University's Earth Institute. "Sometimes municipalities don't have the capacity to adequately manage recyclable materials."

For decades, the nation's trash was offshored to China. That changed in 2018, when China banned imports of foreign garbage because the paper and plastics that were shipped were too contaminated.

The decision amounted to a loss of about $400 million in U.S. exports per year, and forced more than 100 cities and towns to end or pause their recycling systems altogether.

Researchers estimate China's ban will leave 111 million tons of plastic waste around the world with nowhere to go by 2030. Some experts say the ban pushed American cities and businesses to rethink recycling and their environmental footprint overall.

"We're seeing a rebirth of recycling in the United States, and it's becoming clear that we don't need China's market and we don't need big waste," says Neil Seldman, co-founder of the Institute for Local Self-Reliance. "Cities and small companies are doing this on their own."

But China's ban also created an overwhelming gap in demand that has left the nation's recycling industry struggling to keep up. The EPA estimates the U.S. produces roughly 292 million tons of waste a year. About 75% of that waste can be recycled, but only about 30% actually is — either because people don't try to recycle or because recyclable trash isn't properly handled.

Complicating things further is the fact that there is no uniform standard for recycling across the country. What gets recycled and how much varies widely among cities and towns.

"Many communities have different recycling rules, so it's understandably confusing to many of us exactly what and how to recycle," says Eric A. Goldstein, senior attorney and New York City Environment Director at the Natural Resources Defense Council.

Experts say for too long, the onus of recycling has fallen on consumers, with manufacturers urging customers to recycle items without producing ones that are easily recyclable in the first place. That's led nearly a dozen states to support extended producer responsibility (EPR) laws that would place the responsibility of recycling on producers rather than municipalities and taxpayers.

Experts say that even though the U.S. recycling system is flawed, there is something everyday Americans can do about it — by recycling better and smarter.

"Change has to happen at all three levels," says Goldstein. "It has to start with government adopting strong laws and programs to advance recycling and build a more sustainable society. It then is up to industry. There is also, of course, a role that we, as individuals, can play."