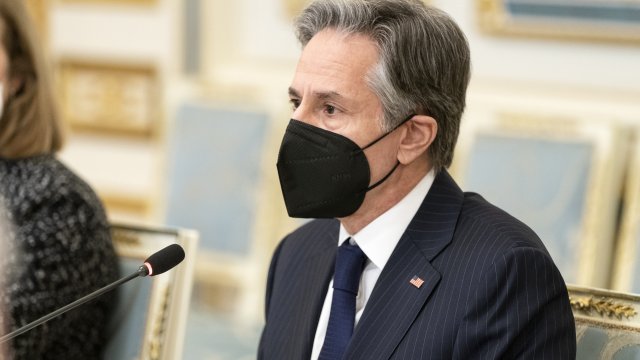 U.S. Secretary of State Antony Blinken urged western nations Wednesday to remain united in the face of what he called "relentless" Russian aggression against Ukraine and reassured Ukraine's leader of their support.

Blinken told Ukrainian President Volodymyr Zelenskyy during a visit to Kyiv that the U.S. and its allies were steadfast in backing his country and its democratic aspirations amid growing fears of a potentially imminent Russian invasion.

Ukrainian officials have warned that Russia could launch an attack on Ukraine from several directions, including from its ally Belarus.

The Biden administration said earlier it was providing an additional $200 million in defensive military aid to Ukraine to help protect its sovereignty and territorial integrity.

Zelenskyy thanked Blinken for the assistance, which was approved in late December but not formally confirmed until Wednesday, as well as for his visit and assurances of support.

"This (military) support not only speaks to our strategic plans of Ukraine joining the alliance, but more importantly to the level of our military, our military supplies," he said, referring to Kyiv's desire to join NATO over Russia's strong objections.

The aid announcement came at the start of Blinken's hastily arranged visit as U.S. and western officials stepped up increasingly dire warnings about a possible Russian invasion.

Blinken said Russian President Vladimir Putin is now in position to launch military action against Ukraine at will and at very short notice with more than 100,000 troops massed on its border and plans to add more.

After his meetings with Zelenskyy and other senior Ukrainian officials, Blinken plans a short trip to Berlin for talks with German and other European allies on Thursday, He is scheduled to see his Russian counterpart, Sergey Lavrov, in Geneva on Friday. That meeting is aimed at testing Russia's willingness to resolve the crisis diplomatically, officials said.