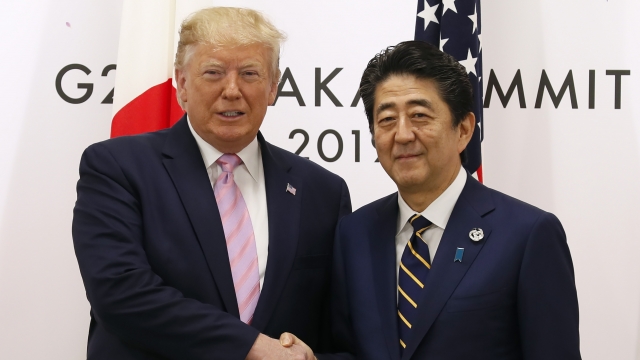 ​Under the deal, Japan will eliminate or significantly lower tariffs on a slew of U.S. agricultural goods.

The U.S. and Japan have agreed to a limited trade deal that will open Japanese markets to about $7 billion in American agricultural products.

U.S. President Donald Trump and Japanese Prime Minister Abe Shinzō signed the initial agreement during a meeting at the U.N. on Wednesday. President Trump praised the deal as a "huge victory for America's farmers, ranchers and growers," adding that the agreement should help farmers hurt by tariffs imposed by China in the trade war.

Under the deal, Japan will eliminate or significantly lower tariffs on a slew of U.S. agricultural goods, including beef, pork, cheese, wine, and certain nuts and berries. The U.S., meanwhile, will reduce or eliminate tariffs on some Japanese exports, including bicycles, musical instruments, green tea and soy sauce.

The two countries also reached a separate agreement on a set of provisions related to digital trade. This includes a prohibition on imposing tariffs on digital products transmitted electronically, like videos, music, e-books, software and games.

The Trump administration said it will continue negotiations with Japan "in the interest of achieving a final, comprehensive trade deal."