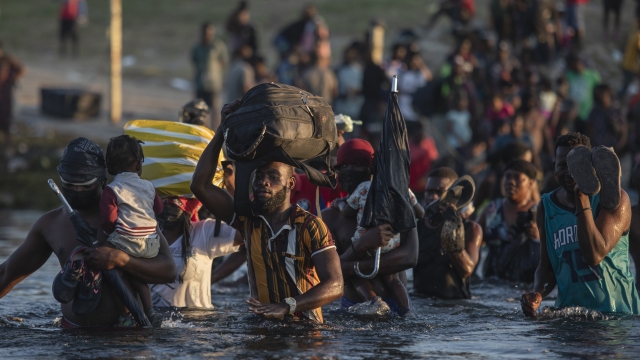 SMS
U.S. Ramps Up Deportation Of Haitian Refugees
By Haley Bull
By Haley Bull
September 20, 2021
The Biden administration said it's committed to improving conditions in Haiti.

The U.S. is scaling up efforts to expel people from the U.S.-Mexico border as thousands are estimated to be camping under a bridge in Del Rio, Texas, including many Haitian migrants.

U.S. officials said they have sent more personnel and are flying people back to Haiti and other countries they previously lived.

"He walked on foot, running, and migration (officials) behind us. Not all people are good people. There are bad ones too, and they scammed us in other countries too, they took our money too, we lived through a lot of calamities," said Haitian migrant Wiston Demeille.

Video showed migrants crossing the Rio Grande back to Mexico to Friday.

"It's not right. The Americans are grabbing Haitians and deporting everyone to Haiti. Haiti has no president, no jobs, there is nothing," said Haitian migrant Jean Philipe Samus.

The Department of Homeland Security said it's moved thousands of migrants so far, most facing expulsion under CDC authority adopted during the pandemic.

The agency said they're working to increase capacity of return flights, anticipating at least one to three a day.

"We are undertaking urgent humanitarian actions with other relevant federal, state and local partners to reduce crowding and improve conditions for migrants on United States soil," said Secretary Alejandro Mayorkas.

"We made an assessment based on the country conditions as we are required to do that a redesignation of Haiti was not warranted on the facts on the conditions in Haiti, that Haiti could in fact receive individuals safely. Temporary Protected Status is available to those who have been in the U.S. before July 29 and that is not changing," said Mayorkas.

Haiti is dealing with the aftermath of the killing of its leader and a devastating earthquake in its southern region this summer.

"We're concerned about them being sent back to Haiti and then we're also concerned about what type of protections they can receive in other countries and in the U.S.,” said Yael Schacher, senior U.S. advocate for Refugees International.

Schacher explained some people may have left Haiti recently, while others several years ago moving to other countries first.

"My main concern is that the Biden administration is claiming to send a message to other people not to come to the border. It's specifically targeting Haitians picking out Haitians as a population to expel to a country where they will not be safe – it could be sort of a human rights catastrophe," said Schacher.

Others are speaking out against the situation, too.

"Ten (thousand) to 15,000 people is nothing for the U.S. government to handle. That is not a crisis, that is a choice. That is a choice that is being made by this administration to say Black people are not worthy of care," said Patrice Lawrence, the executive director of the UndocuBlack Network.

Lawrence said they are enraged seeing what was happening in Del Rio. The organization was one that wrote a letter to the administration calling for protection of Haitians after the assassination of the Haitian president.

"I think that their next steps needs to be grounded in a system compassion, of care and of equity and justice that the Biden administration, the Biden-Harris administration, promised they would do," said Lawrence.

Meanwhile, the Biden administration said it's committed to improving conditions in Haiti.