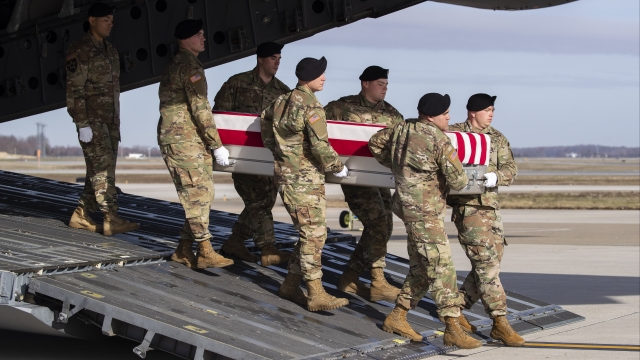 SMS
U.S. Pulls Troops From Bases As Taliban Keeps Up Afghanistan Attacks
July 15, 2020
The drawdown is part of an agreement between the U.S. and the Taliban that could lead to withdrawal of American forces by May 2021 or earlier.
SHOW TRANSCRIPT

For nearly 19 years, these have been sights and sounds of the longest war in American history. Now the U.S. has pulled forces from five bases in Afghanistan. The withdrawal, announced Tuesday, signals a continuing troop reduction in a conflict that has killed nearly 3,500 U.S. service members and wounded 32,000.

The drawdown is part of an agreement between the U.S. and the Taliban that could lead to withdrawal of American forces by May 2021, or earlier.

But Tuesday's announcement came just a day after Taliban forces launched a sustained attack on a northern Afghanistan military intelligence complex. Authorities say 11 people were killed and more than 60 wounded.

The attack may have marked another death knell for prospects for peace in Afghanistan. Talks between the Taliban and the Afghan government are stalled. Bombs and bullets appear to remain the current tool of negotiation.

The Washington Post reported that insurgents carried out 44 attacks or bombings on Sunday and another 30 on Monday. A former Afghan foreign minister, Rangin Dadfar Spanta, told the newspaper: “The Taliban are in a state of glorification, and the country is in a state of resignation."

U.S. State Department envoy Zalmay Khalilzad said the U.S. base closures are proof of American commitment to an Afghan peace process. But he said the Taliban's attack Monday on the intelligence complex in the city of Aybak "contradicts their commitment to reduce violence" and "will strengthen those who oppose peace."

The U.S. has 8,600 troops remaining in Afghanistan. A Pentagon spokesman said Tuesday said the U.S. deployment level will "maintain the capabilities and authorities necessary to protect ourselves, our allies and partners." Meanwhile, the Afghan peace process faces continued peril.