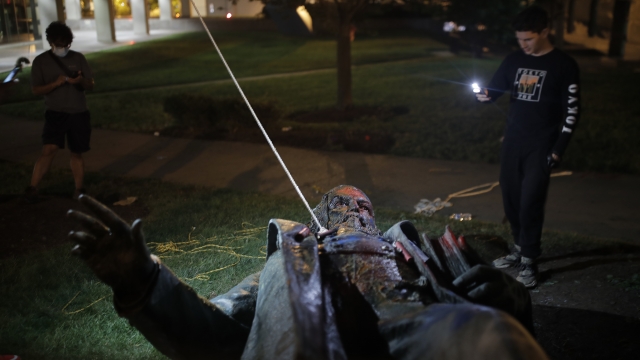 Protesters across the U.S. marked the Juneteenth holiday Friday with anti-racism rallies, with some participants tearing down Confederate statues.

Juneteenth honors the day a Union army general arrived in Galveston, Texas, to formally free slaves. This year there were conflicting messages coming from the White House. An official statement commemorated the holiday. But President Trump went on Twitter, threatening action against protests against his Saturday rally in Tulsa.

Demonstrators in Washington D.C. toppled and burned the capital's only outdoor statue of a Confederate general. The crowd stood in a circle around the burning statue of Albert Pike on Friday and chanted "No justice, no peace!" and "No racist police!" Police didn't intervene. That prompted a critical tweet from President Trump, who said protesters should be arrested.

In North Carolina's capital Raleigh, protesters pulled down two Confederate statues — one of a cavalryman and one of an artilleryman. The cavalryman was hung by its neck from a light post while the artilleryman was dragged through the streets and left on the steps of the courthouse. At one point a protester pushed his knee into the neck of the artilleryman, echoing the position a police officer took on George Floyd's neck as he died.

In San Francisco's Golden Gate Park, protesters tore down three statues. One statue was of Francis Scott Key, the writer of the national anthem. Key owned slaves and defended slavery in court. Another was of St. Junípero Serra, who founded the first nine Spanish missions in California. A third was of President Ulysses S. Grant. He was a hero on the Union side, but owned a slave for about a year. Grant freed him before the start of the war.