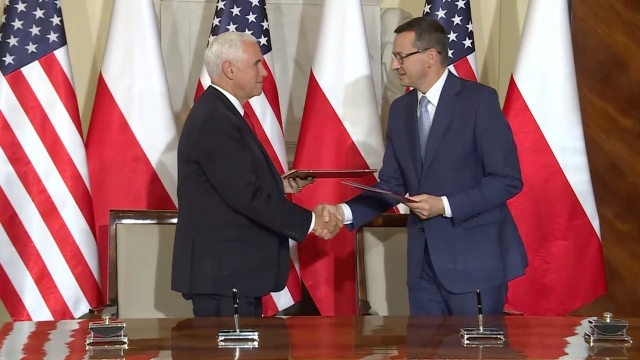 The deal endorses provisions to counter threats and ensure the safety of next-generation mobile networks.

The U.S. and Poland have signed a deal to cooperate on new 5G technology.

Vice President Mike Pence and Polish Prime Minister Mateusz Morawiecki signed the agreement Monday. It endorses provisions to counter threats and ensure the safety of next-generation mobile networks — principles developed by cybersecurity officials at a summit in Prague in May.

The deal says, "Protecting these next generation communications networks from disruption or manipulation and ensuring the privacy and individual liberties of the citizens of the United States, Poland, and other countries is of vital importance."

This agreement comes amid tensions between the U.S. and China over network security.

The U.S. has called for Chinese telecommunications giant Huawei to be banned from 5G network access and has been lobbying allies to do so, but European countries haven't obliged. Pence says Monday's deal will "set a vital example for the rest of Europe."

The U.S. is concerned China could force Huawei to share data for cyberespionage purposes, a claim Huawei has denied.

Pence took President Donald Trump's place on the trip to Poland after the president announced he would stay in the U.S. because of Hurricane Dorian.