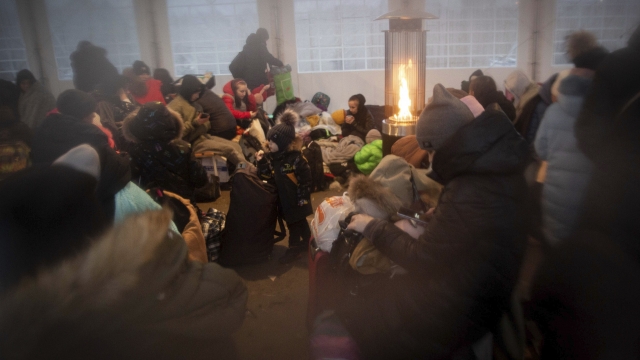 Hope Now Ministries, an Atlanta-based organization, has helped dozens of women and children evacuate from Ukraine.

Members of the ministry have been helping orphans in central Ukraine for decades. But since the Russian invasion of the country, the ministry is doing a different kind of work.

"We have a boys' house called Greenfield, and God just blessed us because it has a bomb shelter. That Greenfield house has served the whole community as a bomb shelter, and it's filled every single night," said Cyndee Knight, president of Hope Now Ministries.

Because men ages 18 to 60 are not allowed to leave the country, Hope Now is focusing its efforts on women and children, by securing vans and drivers to shuttle them to the border.

"The air-raid sirens started going off. I don't know how he (the driver) was able to do it, but he found the girl, got her and her little boy out of the apartment — just as they saw the missile going through the air," Knight said.

Knight is working tirelessly with friends and contacts across Europe to get the women and children to safety.

"I can happily say that today, we have flown three of them to Italy. And then we have four girls who are in Budapest today and they are going to fly to Sweden tomorrow," Knight said.

Other U.S.-based organizations are also stepping up, like the Course of Action Foundation in St. Petersburg, Florida.

"People are leaving their homes. They don't have the accommodation of showers or washing their hands, so those two things are what we need right now the most," said Arlene Marie, director at Course of Action Foundation.

Volunteers there packed up hygiene items and emergency medical supplies to ship off to refugees.

Back on the ground in Ukraine, Knight says it's a dire situation.

"In many places, the grocery stores are empty."

Knight says in addition to helping with evacuations, Hope Now is also working to collect monetary donations and get the funds directly into the pockets of Ukrainian people.