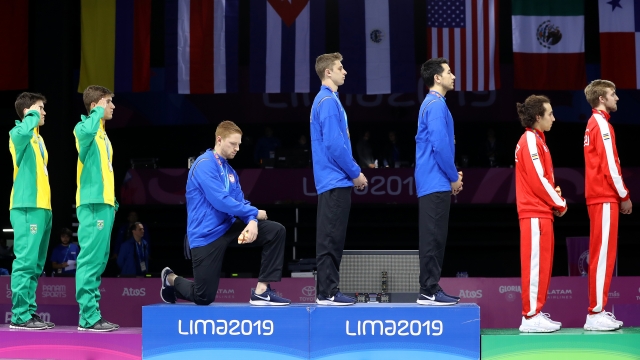 Political protests have no place on the medals stand, says the head of the U.S. Olympic and Paralympic Committee. On Tuesday, USOPC chief executive Sarah Hirshland issued a formal reprimand to two Team USA members who staged demonstrations earlier this month at the Pan American Games in Lima, Peru.

In letters obtained by The Associated Press, Hirschland put hammer thrower Gwen Berry and fencer Race Imboden on notice, placing them on a 12-month probation.

The AP reports Hirshland suggested athletes who do similar demonstrations could face even harsher punishments — a warning to others who may consider protests at the 2020 Tokyo Games.

She said, "Working with the [athletes and national governing body councils], we are committed to more explicitly defining what the consequences will be for members of Team USA who protest at future Games."

The International Olympic Committee requires athletes to sign pledges stating they will not break rules forbidding political protest at the games.

Berry and Imboden are among other professional athletes who have used their platforms to highlight critical social issues, including gun violence and racial injustice and inequality.

Imboden, who won gold and bronze medals as part of the men's foil team, knelt during the national anthem to protest what he called the "shortcomings" of his country.

His demonstration echoes that of former NFL quarterback Colin Kaepernick, who has remained absent from the league since 2016 when he first protested against police brutality.

Berry, one of the top throwers in the world, raised her first during her gold medal ceremony — an act reminiscent of John Carlos and Tommie Smith's iconic protest at the 1968 Olympic Games.

The gesture, she said, wasn't meant to be a "big message" or "spectacle", but something she felt she had to do.

Both athletes will still be able to try out for Team USA and potentially compete in the 2020 Olympics.

The AP reports Hirshland said she respects the athletes' ideas and intended to "engage on a global discussion on these matters" with the IOC. But she added, "We can't ignore the rules or the reasons they exist."