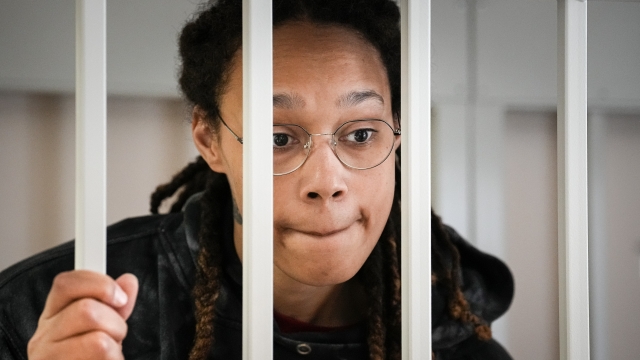 SMS
U.S. Negotiations With Russia On Prisoner Swap For Griner
By Maura Sirianni
By Maura Sirianni
July 30, 2022
Russian officials are asking that a former colonel from Russia’s domestic spy agency be included in the proposed prisoner swap, according to CNN.

As WNBA star Brittney Griner and American businessman Paul Whelan sit in prison, Russia and the U.S. continue discussions about the possibility of a prisoner swap.

The Biden administration has reportedly offered to release Russian arms dealer, Viktor Bout, if the Kremlin would release Griner and Whelan.

"We had a frank and direct conversation. I pressed the Kremlin to accept the substantial proposal that we put forth on the release of Paul Whelan and Brittney Griner," said U.S. Secretary of State Antony Blinken.

But the proposal might not be enough for Russia, according to CNN sources.

Krasikov worked for Russia's domestic spy agency and is serving life in prison in Germany for the murder of a former Chechen fighter last December in broad daylight.

"Here we are asking for, you know, a basketball player back and somebody we know to be innocent. You don't want to get China and Russia and Iran used to the notion that they just need to clip an American on their street, throw them in, and they get to trade for the worst of the worst," said Rep. Jim Himes.

Earlier this week, Griner explained to a judge "my rights were not read to me," after Russian authorities dug through her luggage and found illegal marijuana vape cartridges and demanded she sign papers she didn't fully understand.

As friends, loved ones, and supporters, continue to speak about her detainment, Griner testified about her case for the first time since her arrest in mid-February. The 31-year-old basketball star said injuries led to a doctor recommending she use marijuana to treat nagging pain, adding she might have accidentally packed the vape cartridges in her luggage.

"She had no intention to break any Russian law. She knows that this is prohibited in Russia. She knows Russian law. So, there is no intent in her actions. That, we think, is key for the case," said Mariya Blagovolina, Brittney Griner's lawyer.

Griner faces up to 10 years in prison if convicted of transporting drugs. Earlier this month, she wrote in a letter to President Biden, "I am terrified I might be here forever." Her attorneys may be recommending a fine or a lighter prison sentence, but experts say a prisoner swap is perhaps Griner and Whelan's fastest shot at freedom.

"Holding two American citizens hostage in exchange for an assassin in a third-party country is not a serious counteroffer," said John Kirby, National Security Council Coordinator for Strategic Communications.

"We're going to continue to monitor the case of Ms. Griner very closely as well as the cases of all US citizens detained or imprisoned in Russia," said Elizabeth Rood, U.S. Embassy Chief of Mission.

When it comes to the swap, a German source tells CNN, U.S. officials have inquired about including Krasikov. but say the conversations never made it to the top levels of the German government and say including him in a potential trade has not been seriously considered.

Griner's trial is expected to wrap up sometime next week.