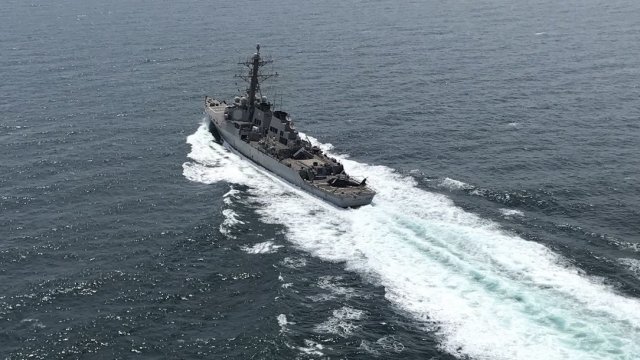 SMS
US Angers Beijing, Sending Ships Near China-Claimed Islands
By James Packard
By James Packard
May 28, 2018
The U.S. doesn't recognize the Paracel Islands as part of China and sent ships sailing past them to send a message to Beijing.
SHOW TRANSCRIPT

The U.S. reportedly sailed two Navy ships past disputed islands in the South China Sea on Sunday, a move meant to rebuff Beijing's claim to the territory.

A U.S. official told CNN the USS Higgins and the USS Antietam sailed past the Paracel Islands in what's called a "freedom of navigation operation" — an intentional pass-by of the islands meant to snub China's claim to the territory and treat it as international waters.

China said the operation was a "serious infringement" on China's sovereignty. Its national defense ministry said Chinese ships went to identify the American ships and "warn them off." A spokesperson said the move "undermined strategic mutual trust between the two militaries and damaged peace, security and good order in relevant waters.