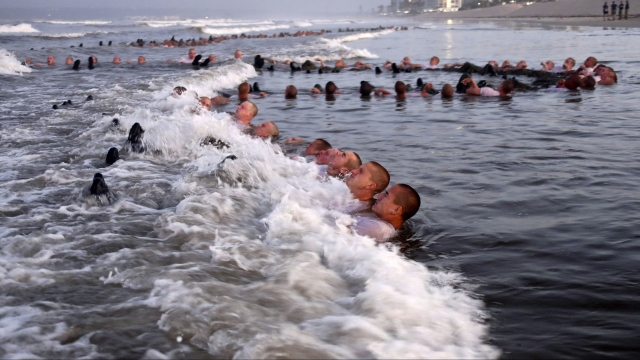 A Navy SEAL candidate who died just hours after completing the grueling Hell Week test was identified Sunday as a 24-year-old sailor who joined the military last year.

Seaman Kyle Mullen died at a San Diego-area hospital Friday after he and another SEAL trainee reported experiencing symptoms of an unknown illness, the Navy said.

The other sailor, whose name has not been released, was hospitalized in stable condition, the San Diego Union-Tribune reported Sunday.

The cause of death is unknown and under investigation. Both men fell ill just hours after they successfully completed the test that ends the first phase of assessment and selection for the elite Basic Underwater Demolition/SEAL (BUD/S) class.

The Navy said neither one had experienced an accident or unusual incident during the five-and-a-half-day Hell Week.

"We are extending every form of support we can to the Mullen family and Kyle's BUD/S classmates," Howard said.

Mullen joined the Navy in March 2021, according to his Navy biography. He reported to SEAL training in Coronado in July, the Union-Tribune said.

The Hell Week test is part of the BUD/S class, which involves basic underwater demolition, survival and other combat tactics. It comes in the fourth week as SEAL candidates are being assessed and hoping to be selected for training within the Naval Special Warfare Basic Training Command.

The SEAL program tests physical and psychological strength along with water competency and leadership skills. The program is so grueling that at least 50% to 60% don't make it through Hell Week, when candidates are pushed to the limit.

The last SEAL candidate to die during the assessment phase was 21-year-old Seaman James Derek Lovelace in 2016. He was struggling to tread water in full gear in a giant pool when his instructor pushed him underwater at least twice. He lost consciousness and died.

His death was initially ruled a homicide by the San Diego County Medical Examiner. A year later, after an investigation, the Navy said it would not pursue criminal charges in Lovelace's drowning. An autopsy revealed he had an enlarged heart that contributed to his death, and that he also had an abnormal coronary artery, which has been associated with sudden cardiac death, especially in athletes.

It was unclear from the autopsy report how much Lovelace's heart abnormalities contributed to his death.

The latest death also comes just two months after a Navy SEAL commander died from injuries he suffered during a training accident in Virginia. Cmdr. Brian Bourgeois, 43, fell while fast-roping down from a helicopter, and he died several days later.