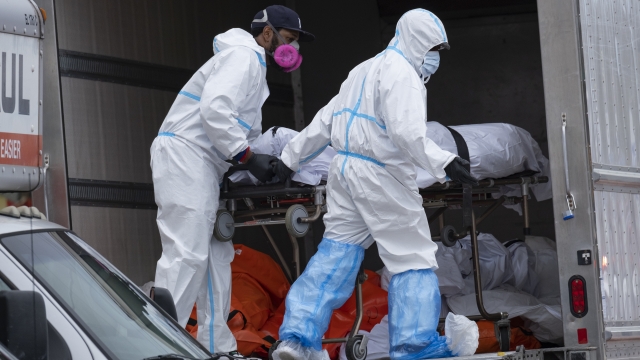 SMS
Former CIA Chief Says Intelligence Community Must Adapt After Covid-19
By Sasha Ingber
By Sasha Ingber
May 11, 2020
Experts say the U.S. national security doctrine is outdated. It must prioritize China, and climate change, which is linked to infectious diseases.
SHOW TRANSCRIPT

More people in the U.S. have now died from the coronavirus than the Sept. 11 terrorist attacks and the wars in Vietnam, Iraq and Afghanistan combined. Security experts say the approach to protecting the country must and will inevitably change.

"When I was at CIA, it was all the time, terrorism. Intelligence actually now has to do many different things, which we didn't do before."

Gen. Michael Hayden, who previously led the CIA and NSA under Presidents Clinton, Bush and Obama, tells Newsy the shifts will go beyond traditional threats like terrorism. He isn’t the only one.

"I think what COVID-19 has shown, it's basically been a stress test for our institutions and we have failed, badly," says Rod Schoonover, a former senior analyst in the U.S. State Department's intelligence unit, now the founder and CEO of Ecological Futures Group.

A recent Pew Research Center survey finds infectious diseases are now the top fear for Americans, followed by terrorism and nuclear weapons. Experts say the U.S. needs to look more closely at climate change, and its potential to exacerbate danger.

"It's a perfect environment for terrorists to not only thrive, but to bring new people into their fold."

Analysts are watching the Middle East and megacities in Africa and Asia. But China, the world’s second-largest economy, stands on its own as a national security priority.

"I think much of our time now will be spent on China. Not Russia. Not the Middle East. It's China," says Gen. Hayden.

The intelligence community has long seen China as a threat — with leaders working to diminish U.S. influence and spread authoritarian capitalism. But Beijing’s secrecy in the early days of the pandemic, followed by aggressive moves in Hong Kong, Taiwan and the South China Sea, have increased tensions with Washington.

In the U.S, the Department of Homeland Security tells Newsy it’s already monitoring the potential use of COVID-19 as a bioweapon.

It comes as some intelligence professionals worry President Trump is politicizing their community.

"What I'm trying to say is everybody is gone," says Hayden. "They fired the professionals."