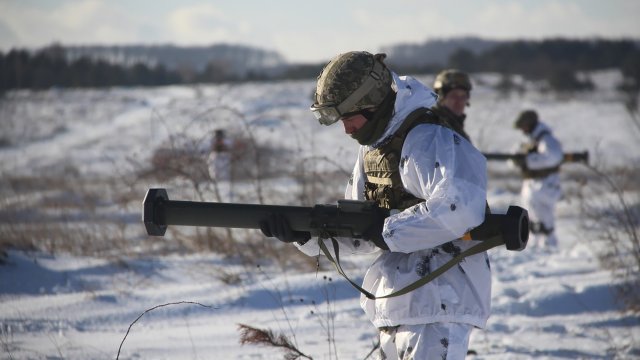 Ukraine’s military released these photos taken Sunday. They show U.S. Instructors training Ukranian soldiers on the use of missile launchers, specifically the shoulder-launched weapon known as the M141 bunker defeat munition. The M141 is described by the U.S. Military as a system that’s “highly effective against targets including fortified positions” and capable of breaching walls and “neutralizing light armored vehicles.” the American trainers are from the Florida National Guard. They were deployed in November to Ukraine.

The Florida National Guard is conducting training at a base in western Ukraine, far from the eastern border. It's around a 12-hour drive away from where Russian president Vladimir Putin is staging troops and high-tech military equipment.

Ukraine’s secretary of national security told the AP on Monday that Russian forces would be immediately repelled if they attacked. He said his government has the capability to mobilize 2.5 million people.

But Ukraine’s government now also estimates that Russia has at least 127,000 troops massed on three sides of the country.