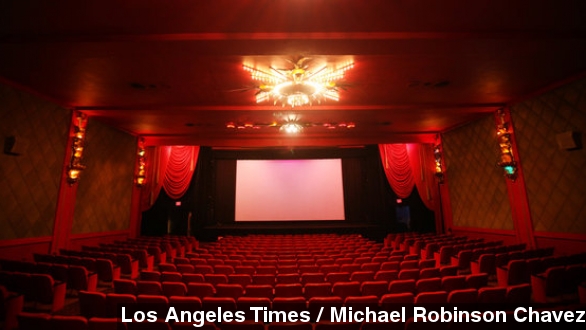 Remember when movie ticket prices were less than $5 a pop? Yeah, me neither. A new report released this week says fewer Americans are going to the movies and ticket prices might be to blame.

And as ticket prices grew, the number of tickets sold decreased. Now, the National Association of Theatre Owners says they're going to experiment with discounted ticket prices to boost attendance.

The association's VP John Fithian told journalists at CinemaCon — an annual meeting of movie theater owners — a model is being drafted to implement discounted ticket prices one day a week. According to The Hollywood Reporter, Fithian said, "This is something that has worked for years in Latin America and Canada. Our capacity is so underused on some days, such a Tuesday, so why not bring more people into the cinema? We are looking aggressively at it."

A writer for Mashable notes the one-day discount is a "notable concession" considering theater owners have been steadfast on not providing discounts. He adds, "That’s largely because studios are promised a hard cut of each ticket; any discount would slice directly into the theaters’ take."

Fithian's proposal to slash ticket prices wasn't the only news, but I think we ought to break for intermission.

While overall ticket sales decreased, the Los Angeles Times reports tickets sold to children 11 years old and younger was at its highest point since 2009, thanks to movies like "Despicable Me 2" and "Frozen." Tickets sold to baby boomers between 50 and 59 years old was at an all-time high in 2013.

Another takeaway from CinemaCon was China's box office numbers. Businessweek reports China's revenue grew 27 percent last year reaching $3.6 billion. According to the MPAA, surpassing $3 billion is a first for any foreign market.

Fithian added that the slashed movie ticket prices would debut — with the cooperation of theater owners — in an undisclosed state sometime this year.