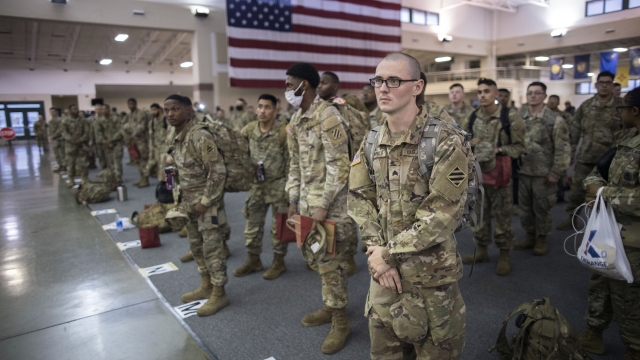 The Navy met its target goal and so did the Air Force, although with fewer additional recruits than in previous years. Meanwhile, the Army fell short.

17-year-old Xitlali Vazquez can't wait to be a pilot.

"You just feel this warm rush of heat running through your body," she said. "It's really this excitement that you feel, you feel a sense of freedom."

The Arizona high schooler is one of 20 students in the country to attend the Elite U.S. Navy Summer Flight Academy.

But not everyone is as excited as Vazquez is to join the military. The armed services are struggling to recruit in a tight civilian job market and haven't had this much trouble since 1973, which is the year the draft ended.

"We've had a COVID pandemic. It's been difficult to get out to the places that recruiters normally get to — going into schools, meeting people face-to-face, shaking hands, telling them about the military, going to malls, going to in-person events," Rand Corporation Senior Policy Researcher Jeffrey Wenger said.

With record-low unemployment numbers, the majority of military branches are feeling the pinch.

"The civilian labor market is always an important competitor for the military services to recruit from," Wenger said. "So, people who are graduating from high school, 'Am I going to college? Am I going to get a job?'"

Why Is Military Recruitment Low?

Military recruitment is the lowest it's been in years, due in part to the pandemic creating a lack of opportunities to recruit in schools.

The Navy barely made its recruiting goal this year, bringing in 33,442 sailors, which is 42 more than the target. To expand their candidate pool, they've bumped the maximum enlistment age from 39 to 41. The Air Force met its numbers, but had fewer additional recruits than in previous years. And the largest branch, the Army, fell short. It missed its goal by 25%, or 15,000 soldiers.

"One of the things the Army needs to do is figure out how to get more and better information into decision makers — young, young adults. And how do we actually tell them what our pay is like? How do we get them to understand what the education benefits are like, what the job duties are?" Wenger continued.

Congress has put pressure on the Pentagon to increase recruiting efforts, and some branches are offering bonuses of $10,000 and more. But with the younger population having a lackluster interest in serving — and, by some accounts, lacking the physical shape to qualify — should we be worried?

"If we fail to hit our end strength goals, if we fail to meet our Congressionally-mandated military size, it will eventually — if not tomorrow, eventually — lead to a difficulty in achieving our military's mission," Wegner warned.

The mission of defending our country.

Volunteers, like the female pilots of Navy Strike Fighter Squadron 213, see their jobs as a way to serve the nation and a career opportunity.

"I would like to think that when young girls see us, they know that this is something that you can do," Lieutenant Rebecca Ryan said.