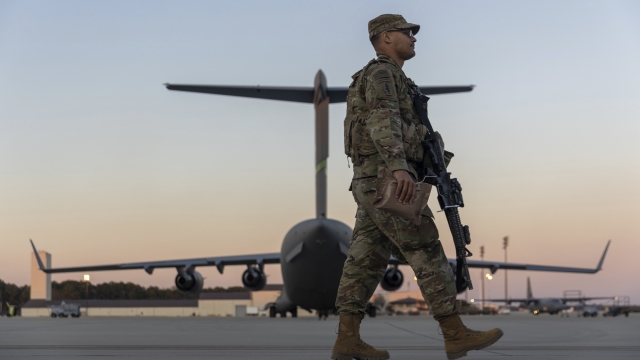 The growing U.S. military presence in Poland is a message to NATO, and especially to Poland, that the U.S. supports them. But it's also part of the brinkmanship — a message to Russia as well.

Across the street from an airport in southeastern Poland, U.S. forces, some who have been there for about a week, are settling in to their indefinite deployment as part of a force of 3,000 additional U.S. service members President Joe Biden is deploying to Ukraine's NATO-member neighbor.

On their way to join them: several hundred soldiers from the 101st Airborne Division in Fort Campbell, Kentucky, who departed for Poland on Tuesday to, as their commander, Maj. Gen. JP McGee, said, "reassure our Polish allies at this critical moment."

A map of U.S. and NATO bases in Poland shows the countries' strategic significance when it comes to its neighbor Ukraine.

The U.S. has long stationed troops in the country; around 4,000 of them regularly rotate through.

But none of those U.S. bases, and none of the Polish ones for that matter, are as close to the border with Ukraine.

These newly arrived American troops are setting up camp next to the airport that serves Poland's southeastern-most city, Rzeszow.

It wasn't really a military base, until now.

These soldiers' temporary — though it's unclear how temporary — home away from home is inside an arena and convention center.

Those inside tell Newsy they're very comfortable and warm and that they're sleeping on cots inside this arena.

It's around three football fields away from the runway where U.S. C-130s are delivering more troops, supplies and equipment.

The U.S. State Department said Wednesday that despite Russian president Vladimir Putin saying that he's pulling back troops from Ukraine's border, the opposite is occurring.

Also on Wednesday, a top U.S. diplomat upped the estimate of the size of Russian forces along Ukraine's borders to 150,000.

While all truly is quiet for now on the eastern front of Poland, the U.S. State Department is set up at a hotel just miles from Ukraine's border to provide emergency consular services for the thousands of American citizens remaining in Ukraine who may need to escape if Western countries' worst fears are realized.

This part of Poland, so close to the Ukraine border, will play a strategic role in the days to come — both as home to U.S. troops and to potential American evacuees from Ukraine.