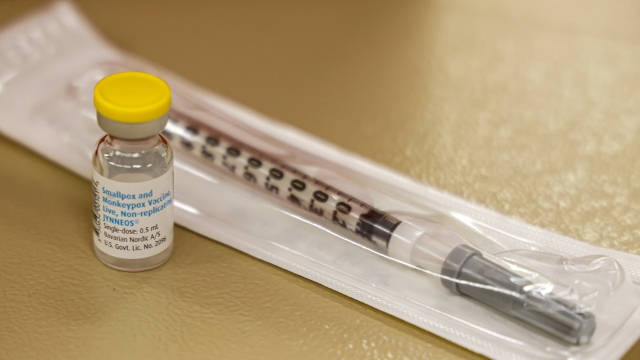 U.S. officials are considering broadening recommendations for who gets vaccinated against monkeypox, possibly to include many men with HIV or those recently diagnosed with other sexually transmitted diseases.

Driving the discussion is a study released Thursday showing that a higher-than-expected share of monkeypox infections are in people with other sexually transmitted infections.

Brooks told The Associated Press on Thursday that he expected vaccine recommendations to expand and that "the White House, together with CDC, are working on a plan for what that will look like."

Currently, the CDC recommends the vaccine to people who are a close contact of someone who has monkeypox; people who know a sexual partner was diagnosed in the past two weeks; and gay or bisexual men who had multiple sexual partners in the last two weeks in an area with known virus spread.

Shots are also recommended for health care workers at high risk of exposure.

The vast majority of monkeypox cases are in men who have sex with men who reported close contact with an infected person during sex. But the new CDC report suggested infections in people with HIV and other STDs may be a bigger issue than previously realized.

Pets that come in close contact with a symptomatic person should be kept at home and away from other animals and people for 21 days.

The report looked at about 2,000 monkeypox cases from four states and four cities from mid-May to late July.

It found 38% of those with monkeypox infections had been diagnosed with HIV, far higher than their share of the population among men who have sex with men.

There were racial differences. More than 60% of Black Americans with monkeypox had HIV, compared with 41% of Hispanic people, 28% of White people and 22% of Asian Americans.

Jason Farley, an infectious disease expert at the Johns Hopkins School of Nursing, said men of color who have sex with men should be at the front of the line for monkeypox vaccine doses. Within those racial and ethnic groups, the next priority should be anyone living with HIV or was recently diagnosed with a STD, he said.

The study has several limitations, including that the data may not be nationally representative, the authors said.

Discussions of expanding eligibility will have to take into account supply of the two-dose vaccine. And any substantial expansion of monkeypox vaccination recommendations may also be subject to review by CDC's outside vaccine advisers, health officials say.

Also on Thursday, the CDC sent a letter to state and local health departments that said federal funds for HIV and STD prevention can also now be used against monkeypox. Cases in the U.S. seem to be declining, officials say.

The CDC is now changing how it releases information to the public due to recent criticism from Americans.