U.S. Lawmakers Call For Billions In Aid For Struggling Restaurants 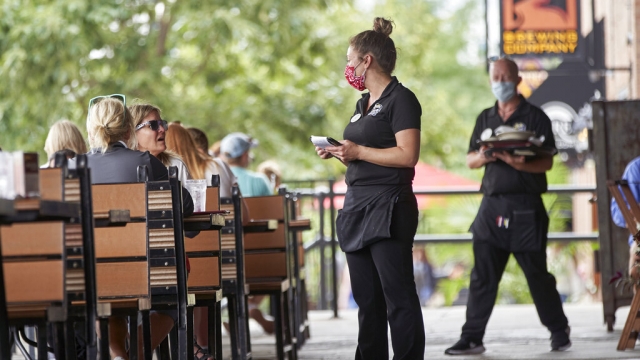 When you look at national metrics, like restaurant sales and the number of food and beverage employees, on paper, it looks like restaurants have rebounded. But after two years of long-term closures, takeout-only rules and capacity limits, business owners say it's going to take years to feel whole again.

From rising prices to hiring struggles, the business of running a restaurant is as difficult as ever.

"They see a busy room, and they think, 'Oh, that person must be making a lot of money.' And it's just not true. I'm in debt up to here, and I'm going to be paying that debt off for a very, very long time," said Jamie Leeds.

Leeds is the founder of Hank's Oyster Bar, with three locations around Washington DC. And she's one of countless restaurateurs hoping Congress can give her industry another helping hand.

"Restaurants are the backbone of our communities. You know, they're the gathering places. They're the places that people have celebrations and it's a happy place for a lot of people and it's really a shame that places are closing. They're still closing," said Leeds.

Congress created the Restaurant Revitalization Fund in March 2021, making $28.6 billion available. But lawmakers knew that wasn't going to be enough to help the nearly 280,000 restaurants that applied.

"We received grants, and we received multiple small grants through DC government. And we applied for RRF for three of the restaurants and we were approved for all three and we only received one," said Leeds.

Even though national restaurant employment and sales have largely returned to pre-pandemic levels, businesses are still struggling to overcome the debt and bills racked up over the last two years.

"The way restaurants operate, is that you use tomorrow's money to pay yesterday's bills. … For example, when we closed in March, I had $800,000 worth of vendor payables that I owed, and I had no income to pay them," said Leeds.

Earlier this month, the House approved a bill to put an additional $42 billion into the restaurant fund. Now Leeds and others have to wait and see if that bill can pass the Senate.

Two similar bills have been proposed in the Senate, and both have at least some bipartisan support. But to avoid a filibuster, they need 60 votes and neither one has that level of support yet.