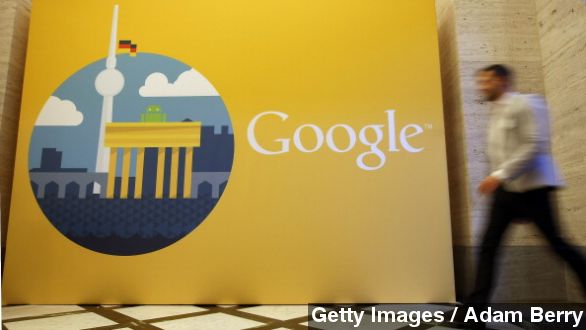 SMS
U.S. Lawmakers Address E.U. Over Proposed Google Break Up
By Madison Burke
By Madison Burke
November 26, 2014
Members of the U.S. Congress warned the E.U. not to follow through with a proposal that would break up Google, saying the move would slow innovation.
SHOW TRANSCRIPT

This is a letter members of the U.S. Congress sent their counterparts in Europe. In it they express “great concern” about an upcoming vote.

Why are American lawmakers weighing in on European politics? In this case, it’s because an American tech company is involved.

Specifically, Google, which is the — albeit unnamed — target of a resolution that would call for the company to separate its search engine from the rest of its commercial services.

That letter, which 12 U.S. lawmakers signed, says a breakup of Google “would stem cross-border data flows at the expense of millions.”

Google is a big target. By most estimates, Google has around 90 percent of the European Union’s search market.

And the rub is that apparently Google is making it hard for other companies to compete. But here’s what’s interesting:

A vote calling for its breakup is expected in the European Parliament Thursday.

Now, we should mention, the Parliament itself does not have the power to force the breakup of a company, but passing it would put pressure on the European Commission to follow up. (Video via Euronews)

The European Commission, by the way, is four years into an antitrust investigation into allegations Google down-ranked search results featuring competitors.

There hasn’t been any publicly released proof that’s the case — and in fact a similar investigation into the company in the U.S. concluded Google hadn’t done anything wrong. In any case, for this to end in a breakup, a lot would have to happen.

An antitrust expert told Vox that includes the European Commission taking Google to court, where it would have to show that the tech giant violated European laws around competition.

And even if that happened, the courts would then have to agree that separating Google’s search services from its other offerings would be the way to fix it. So even if that resolution is successful in Parliament, it would have a long way to go after that to actually mean something.