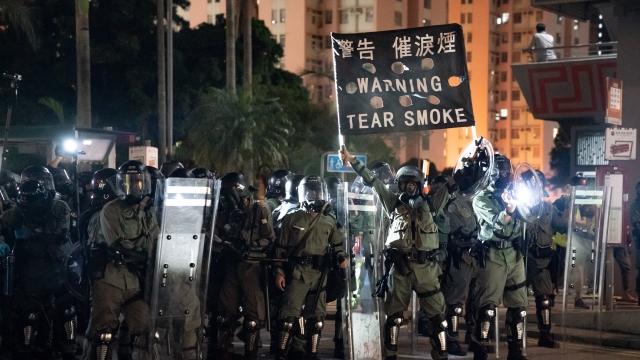 The U.S. has issued a travel warning for Hong Kong following weeks of protests, some of which turned violent.

The U.S. State Department updated its travel advisory for Hong Kong Wednesday to Level 2: Exercise Increased Caution. The department says large- and small-scale political demonstrations "have turned confrontational or resulted in violent clashes," and some "have spilled over into neighborhoods other than those where the police have permitted marches or rallies."

Protests started in early June over a now-suspended extradition bill, which would have allowed China to extradite suspects from Hong Kong. But the protests have grown to include issues like police brutality and calls for Hong Kong's leader to step down.

Earlier this week, protesters clashed with law enforcement, and police said they used 800 tear gas canisters on demonstrators. Some canisters were released in residential neighborhoods — and bystanders, including children, were allegedly affected. Nearly 150 people were arrested.

The U.S. joins a number of other countries — including Australia, the U.K., Ireland, Japan and Singapore — that have issued travel advisories over ongoing demonstrations in the region.