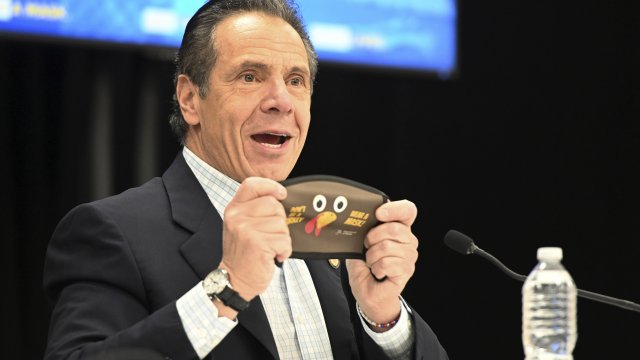 Health officials and state leaders are giving one last warning to reconsider your travel plans and stay home.The worry here, another wave of COVID-19 cases across the country caused by the holiday weekend.

"Really, it shouldn't be about just Thanksgiving. Really, we're saying: This holiday season we have to be smarter and different than we've handled past holiday seasons because it's not a normal holiday season."

Governor Andrew Cuomo also unveiled a new mask that read, "Don't be a turkey and wear a mask", to promote guidelines in place.

If you live in New York, make sure you follow this. A state rule only allows 10 people in the household.

Restrictions have been placed in a majority of states in response to rising COVID-19 cases, deaths and hospitalizations.

The U.S. reported its highest daily death count in more than six months, with more than 2,000 on Tuesday.

According to the Washington Post, nine states reported record deaths. It's the highest number in one day since early May.

To put that in perspective, that's nearly four deaths every three minutes.

Wisconsin was one of those states to set a new record of daily deaths.

"We all most must make short term sacrifices for our long term health. None of us wants to be the one to unwittingly spread this virus to somebody we love, or host the next super spreader event we hear about in the news."

According to data from Johns Hopkins University, Wisconsin is sixth in the country for new cases per capita.