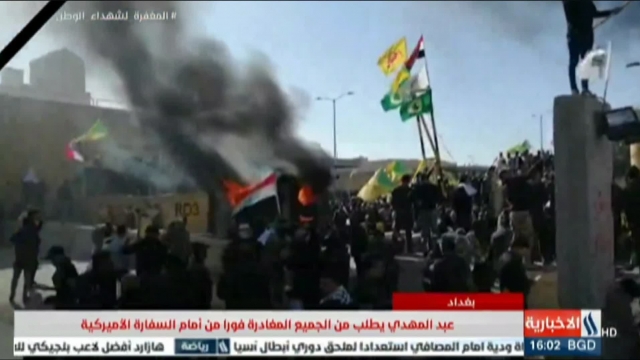 The protests are in response to the five deadly U.S. airstrikes over the weekend that killed 25 and wounded dozens of the Iranian-backed militia operating in Iraq.

A majority of the 6,000 protesters who attended Tuesday's demonstration are part of that same militia group. Dozens of them broke into the embassy's compound, set a reception area on fire and smashed some windows before retreating back outside the gates where they stayed overnight.

President Donald Trump blamed Iran for the protests and ordered 750 U.S. troops to deploy to the Middle East. Defense Secretary Mark Esper did not specify exactly where those soldiers will be sent, but an unnamed source told the Associated Press that they're heading to Kuwait.

The U.S. additionally deployed Apache helicopters to fly over the embassy as a show of force. And roughly 100 U.S. Marines were also sent in to secure the embassy.

There are currently no plans to evacuate the embassy and there are no reports about Americans getting injured in the protests.

Iranian officials say it's not behind the protests. And on Wednesday, Iran's supreme leader warned the country will "unhesitatingly confront and strike" anyone that threatens it.