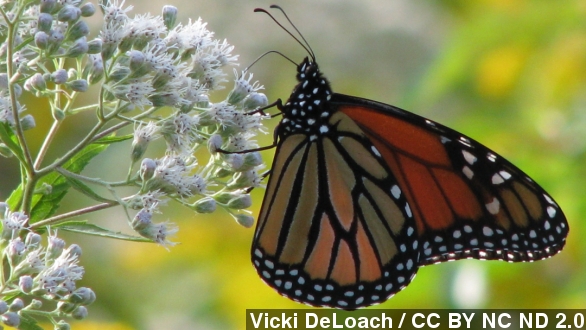 The monarch butterfly, with its orange-and-black wings, is one of the most recognizable butterflies around. But if trends keep up, it might not be around much longer. (Video via U.S. National Park Service)

The monarch's breeding grounds have been destroyed and threatened, leading to a 90 percent drop in its population.

The U.S. Fish and Wildlife Service has pledged $3.2 million to save the iconic insect, $2 million of which is going toward rebuilding 200,000 acres of habitat across the nation. The rest of the money will be given out in grants to those helping conserve the milkweed plant.

And humans are at least partly to blame. We've apparently gotten too good at weed control.

The director of the Fish and Wildlife Service said in a press conference in Washington D.C., weed killers have eradicated milkweed in areas across the country.

Despite the government's willingness to help, the monarch butterfly is not currently listed as an endangered species. But that could change. (Video via Discovery)

The Fish and Wildlife Service is in the middle of a one-year review to determine if the monarch should be classified under the Endangered Species Act, which would give it even more protection.