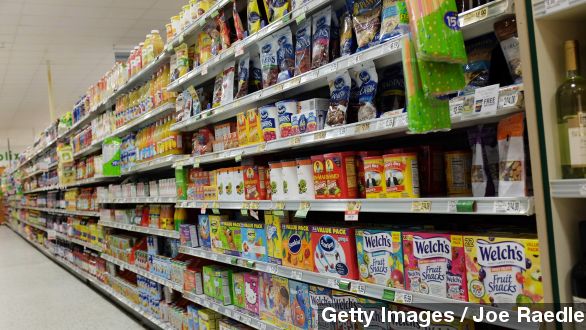 Sixteen large food and beverage companies in the United States that committed to cut calories in their products far surpassed their target.

In an effort to stave off America's obesity problem, a group of 16 high-profile food and beverage companies that committed to cut calories in their products have far surpassed their target.

As part of the Healthy Weight Commitment Foundation Pledge, big manufacturers like General Mills, Kraft Foods, Pepsi and Coke trimmed 6.4 trillion calories from their products from 2007 to 2012 — much higher than their original pledge of 1 trillion.

One of the study's authors says that's about 78 calories per person per day. Now, upfront, these figures might appear pretty significant but some health writers have a different interpretation.

PNC Voice says the study started "about the time recession began," so people probably didn't spend as frivolously. Also, the amount of calories in those products did not decline from 2011-2012, which the researchers even noted as a concern for the future.

And, according to the Centers for Disease Control and Prevention, in the same period of the calorie decline, the number of obese adults in the U.S. increased from 34 to 35 percent. (Video via WWSB)

So what gives? Is there a link between calories and weight gain or should these companies be focusing on reducing something else?

Well, a writer for Medical Daily points to another possible culprit. "The findings could prove once and for all that calories are not as big a problem as sugar and physical inactivity. ... More and more evidence seems to suggest that sugar, not calories, fat, or carbs, is the real enemy of weight loss.

And a CDC report from May mirrors that thought. The report says consuming added sugars has been enabling people from receiving essential nutrients and has contributed to weight gain.

The full analysis of the 16-company pledge was published in the American Journal of Preventive Medicine Wednesday.