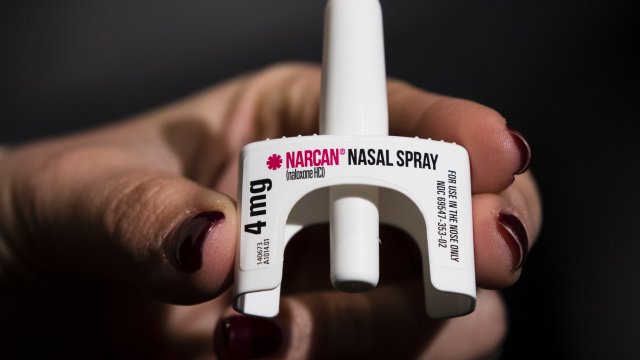 SMS
U.S. Fentanyl Seizures Jump Dramatically
By Lindsey Theis
By Lindsey Theis
March 31, 2022
The amount of fentanyl-laced pills seized jumped 50-fold from 2018-2021. This comes as a record 105,752 Americans died from overdose in one year.

"Last year for example a seizure of 100 fentanyl pills would be a good seizure," Martin said. "Then we started seizing a thousand, then ten thousand.”

Illegally-made fentanyl mostly comes from Mexico. Drug cartels put fentanyl in counterfeit pills, often passing them off as Adderall, hydrocodone or Percocet. Even in small amounts, it can be deadly.

Law enforcement seizures of fentanyl nationwide have skyrocketed in the past few years.

"A lot of people are illegally obtaining pills like Xanax and Vicodin off the street thinking that they are what they are said to be, like Xanax, but they could contain fentanyl," Palamar said.

Yearly drug deaths are the highest they have ever been.

The nasal spray blocks receptors in the body for the emergency treatment of opioid overdose.

It’s one tool in a fight that needs all the help it can get.