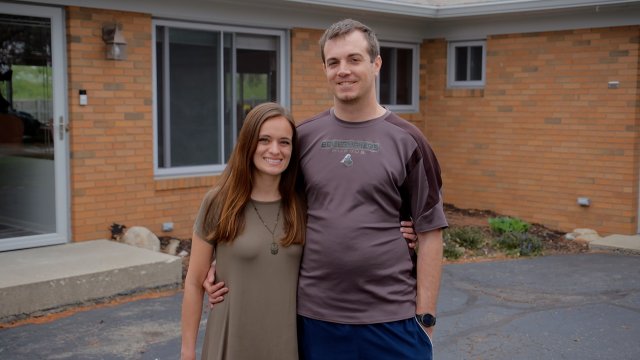 SMS
In Caring For Border Kids, Foster Parents Say 'Love Knows No Language'
By Ben Schamisso
By Ben Schamisso
April 13, 2021
With more than 21,000 migrant children in government custody, hundreds are in the care of U.S. foster families.
SHOW TRANSCRIPT

More than a thousand miles from the southern border, a young Indianapolis couple is parenting and housing migrant children for weeks at a time.

"Love knows no language. So we're here to show you guys love and, you know, everything else is going to fall into place," said Tori, the foster mother.

While the Biden administration scrambles to house a record number of unaccompanied minors in packed border sites, convention centers and military bases, there is a better alternative.

One that relies on the kindness of everyday Americans.

"They have their own bedroom and their own space and it's just them in the house versus, you know, hundreds of kids," said Billy, the foster father.

Billy and Tori are among hundreds of foster parents nationwide stepping up during a pandemic to give migrant kids a safe home — until they're cleared to reunite with their families in the U.S.

They asked that we only use their first names out of concern for their safety and the safety of the kids.

"We have a teen mom and then her two-year-old daughter and then the mom's six-year-old sister," Tori said.

The two sisters and the baby arrived at the border two months ago from Honduras, hoping to reunite with their mother in Texas.

"The 17-year old will Facetime mom pretty much every night. They've got a super great relationship," Tori said.

The reunion could happen in a matter of days — as soon as the government is done vetting the mom.

"It's super bittersweet for us because, I mean, they've been with us for a month. Our relationships have formed. But I just think we have to remember the bigger goal, and that's that these kids are going to do better with their family," Tori said.

Over 21,000 migrant children are currently in government custody, an all-time high. Only around 10% of them can be housed in independent foster homes at the moment.

But the pressure on organizations like Bethany Christian Services to recruit more foster parents is mounting.

"At this point, as soon as a child leaves and is able to be reunited, we're asked to take another child pretty quickly," said Cindy Neal, a foster care recruiter at Bethany Christian Services.

They've already housed eight migrant kids in the past six months. And they're only getting started.

"I come home from work and the kids, like, run to the door and give me this huge hug and I'm like, you know, they had known me for two weeks," said Tori.

"This group loves taking baths. That's like their favorite thing to do. And it's because they've never taken a bath before," said Billy.

"For how long are you going to be doing this?" asked Newsy's Ben Schamisso.