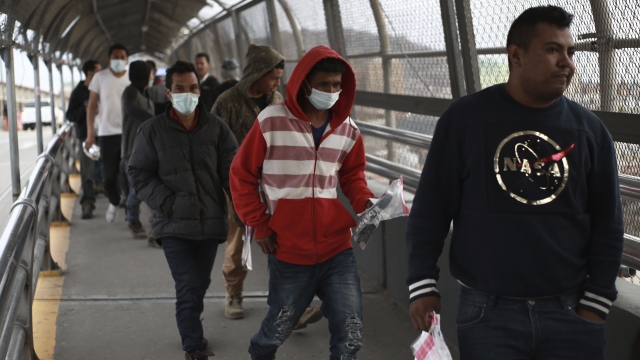 SMS
Trump Admin. Extends Order To Reject Migrants Without Asylum Process
By LeeAnne Lowry
By LeeAnne Lowry
May 20, 2020
The decision extends the White House's March order to deny any migrants due to concerns about spreading COVID-19.
SHOW TRANSCRIPT

The Trump administration extended its public health order to reject any migrant crossing a U.S. border. The CDC published the extension Tuesday.

In March, the White House used a special health care emergency authority to close the border to undocumented migrants and asylum-seekers — including unaccompanied children — due to COVID-19. Federal code allows the surgeon general broad powers to deny entry to anyone who could spread disease in the country.

The original order lasted 30 days, but was extended for another 30 in April. The new extension is indefinite.

Between March 21 and May 13, 59 migrants were allowed to seek asylum, and only two have been permitted to stay in the U.S.

The government at the same time also restricted nonessential travel across the Mexican and Canadian borders. Those rules were extended on Tuesday as well, but only for 30 days.