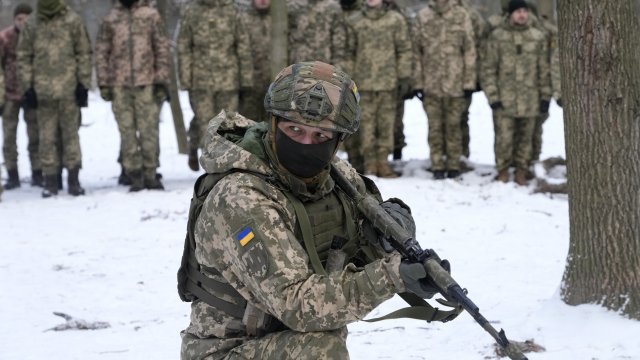 Tensions soared Monday between Russia and the West, with NATO outlining a series of potential troop and ship deployments and Ireland warning that upcoming Russian war games off its coast would not be welcome while concerns abound that Moscow is planning to invade Ukraine.

The Western alliance’s statement summed up moves already announced by individual member countries — but restating them under the NATO banner appeared aimed at showing the alliance’s resolve. It was just one of a series of announcements that signaled the West is ramping up its rhetoric in the information war that has accompanied the Ukraine standoff.

Russia has massed an estimated 100,000 troops near Ukraine’s border and is demanding that NATO promise it will never allow Ukraine to join and that other actions, such as stationing alliance troops in former Soviet bloc countries, be curtailed. Some of these, like any pledge to permanently bar Ukraine, are non-starters for NATO — creating a seemingly intractable standoff that many fear can only end in war.

Russia denies it is planning an invasion, and has said the Western accusations are merely a cover for NATO’s own planned provocations. Recent days have seen high-stakes diplomacy that failed to reach any breakthrough and maneuvering on both sides.

Kremlin spokesman Dmitry Peskov charged that it was NATO and the U.S. who were behind “tensions escalating” in Europe, not Russia.

The West is nervously watching Russian troop movements and war games in Belarus for any signs that a new invasion of Ukraine is imminent. Russia has already invaded Ukraine once, annexing the Crimean Peninsula in 2014. Moscow has also supported pro-Russian Ukrainian separatists fighting the Kyiv government in the Donbass region. Fighting in eastern Ukraine has killed around 14,000 people and still simmers.