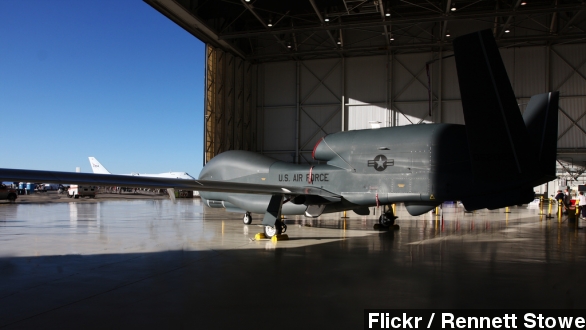 By Erik Shute
June 11, 2014
A drone strike reported Wednesday could be the first U.S. drone operation in six months. Some militants killed had ties to the Karachi airport attack.
SHOW TRANSCRIPT

​Pakistani officials say a U.S. drone strike has killed six militants, some with ties to the Karachi airport attack. If confirmed, it would be the first drone operation in Pakistan this year.

"It happened in the region of North Waziristan. Three missiles were fired on a compound in the area." (Via Al Jazeera)

According to NBC, the militants killed in the attack were reportedly mixed between two Taliban soldiers and four members of the Uzbeks group, an al Qaeda affiliate.

On Wednesday afternoon the Uzbeks group claimed responsibility for the attack on the Karachi airport over the weekend, which left 36 dead. (Via CNN)

The strike ends a six month hiatus by the CIA. Last year, Pakistan asked the U.S. government to stop drone attacks as it prepared to enter peace talks with the Islamic militants. (Via The White House)

But The Wall Street Journal and other outlets say those talks most likely amounted to a "stalemate," punctuated by the Karachi airport attack. Wednesday's drone strike hints that U.S. patience with the talks has worn thin. (Via BBC)

Reporters following the story are asking whether the U.S. strike was requested by the Pakistani government, and whether officials there even knew the strike was going to take place. The Washington Post says Pakistan's response to the strike was unusual.

“Pakistani authorities were quick to condemn past drone attacks, saying they violated the country’s sovereignty. But on Wednesday, there was no immediate comment by the government of Prime Minister Nawaz Sharif.” (Via The Washington Post)

Reporters say Pakistan's government is planning an all-out offensive of its own in the North Waziristan region to combat the militants.