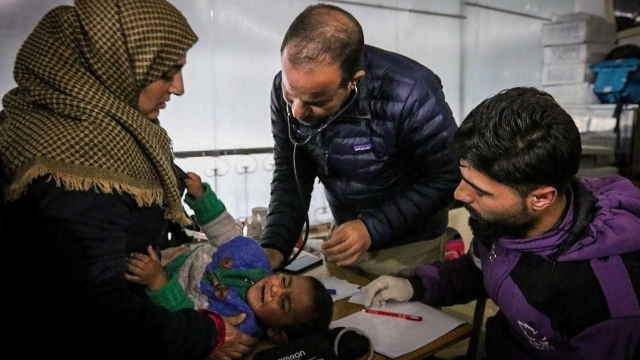 "This is the worst crisis that the world is facing in the 21st century. You know, there are brushfires in Australia, there's all kinds of wars, but we're talking about 4 million people who are trapped in Idlib."

Southern Idlib has been heavily bombarded by the advancing Russian-backed government forces this past month, trapping millions and forcing nearly 400,000 civilians to flee north to the next closest camp or city. Nearby Turkey, already home to millions of Syrian refugees, has sealed its border. So it's virtually impossible for the fleeing civilians, many of them displaced many times before, to escape the conflict.

"The local NGOs and local civic organization have been struggling to accommodate these numbers. So they put them in temporary shelters and tents and camps everywhere. So it's terrible."

Syrian-American Dr. Zaher Sahloul leads an organization that offers free medical care to displaced people around the world. He recently went to Idlib to tell displaced families and local doctors the world hasn't forgotten about them. The region is home to nearly 3 million people. About half of them have already fled fighting in other parts of the country.

"There's this family that has a man and his wife and six young children. They came in the middle of the night, of course, because of the bombing, and they lost everything. And I asked them, 'What do you need?' And you know, the mother looked at me and she cried, and she said, 'everything.'"

Sahloul is calling for donors around the world and the U.N. leadership to help the displaced civilians survive. He says most of the new camps don't have tents that can handle winter conditions — if they have tents at all. He also says the displaced families urgently need food and medical supplies.

"All of these should be provided by the United Nations, and they are not provided. There is no presence for the United Nations on the ground of Idlib. Everyone is aware about donor's fatigue, but I mean, would you leave these people to die because of starvation?"

The United Nations' Humanitarian Response Plan for Syria only met 60% of its funding goal in 2019. A spokesperson for the organization didn't reply to Newsy's multiple requests for a comment. One reason local NGOs are struggling to receive international funds is because the rebel group fighting in Idlib is linked to Al-Qaeda. That's led major donors to limit their cash assistance on counterterror grounds. Sahloul says that's not a good excuse to ignore the plight of displaced civilians.

A cease-fire agreement was recently signed between Syrian President Bashar al-Assad, Russia and rebel-backer Turkey. But only four days later, pro-government forces killed at least 20 civilians in southern Idlib. Local NGOs fear another 250,000 civilians could be displaced if the bombing continues. More than 5,000 civilians have died in Idlib since the military offensive began last spring. And an average of one child per day has been killed since the start of 2020, according to Save the Children. The doctor was most moved by the night he spent with displaced children at a muddy camp.

"I asked the children: 'What do you dream of?' And this young girl, she was displaced with her family seven times before she ended up in this camp. She told me, 'I dream that I can walk to my street without mud. Is there any way to have gravel instead of mud? Because it's very difficult to walk early in the morning on mud.' So I mean, that really affected me. You know, we're talking about young children who are very resilient in spite of the displacement, in spite of the bombing, who are going to school, who insist to go to school, and they want something to ease their walking to school."