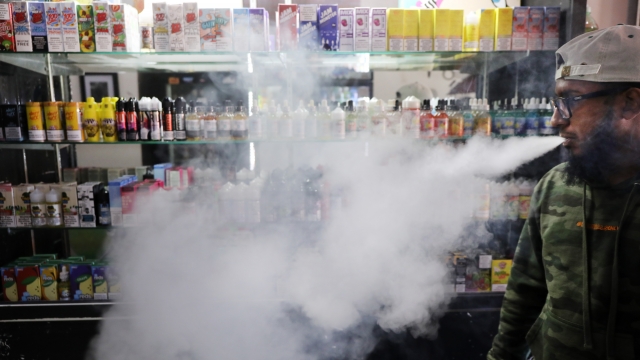 The CDC says the death toll associated with vaping-related illnesses is now 12. The CDC also updated the number of reported illnesses to 805 on Thursday, up 52% since last week.

Mississippi officials announced the state's first vaping-related death on Thursday. California and Kansas have reported two each, and the other seven were in Florida, Georgia, Illinois, Indiana, Minnesota, Missouri and Oregon.

What the CDC does know: All the patients have a history of vaping or using e-cigarettes. But it doesn't know what, exactly, is causing the lung illnesses. There's been an ongoing investigation all summer, but officials are trying to find out if certain substances or the devices themselves are to blame. The waters are also muddled because while most patients reported using THC products, many have reported using THC and nicotine, and some have reported only using nicotine. Other unknown additives may also be related.

The CDC said, "The investigation has not identified any specific e-cigarette or vaping product (devices, liquids, refill pods, and/or cartridges) or substance that is linked to all cases." It has recommended that consumers stop using e-cigarettes and vaping products until it finds out what's causing these illnesses.

Several states have taken action to combat the use of e-cigarettes, mostly by targeting flavored products and advertisements. New York was the first state to officially enforce a ban on vape products with flavors, except for menthol and tobacco. Michigan, the second state to officially enforce a ban, has banned all flavors except tobacco. And California's governor is pushing for legislation as well.

Juul Labs Inc. announced Wednesday that it will suspend its broadcast, print and digital ads. It also announced a new CEO after its former chief executive stepped down amid reports that the company was under federal investigation.